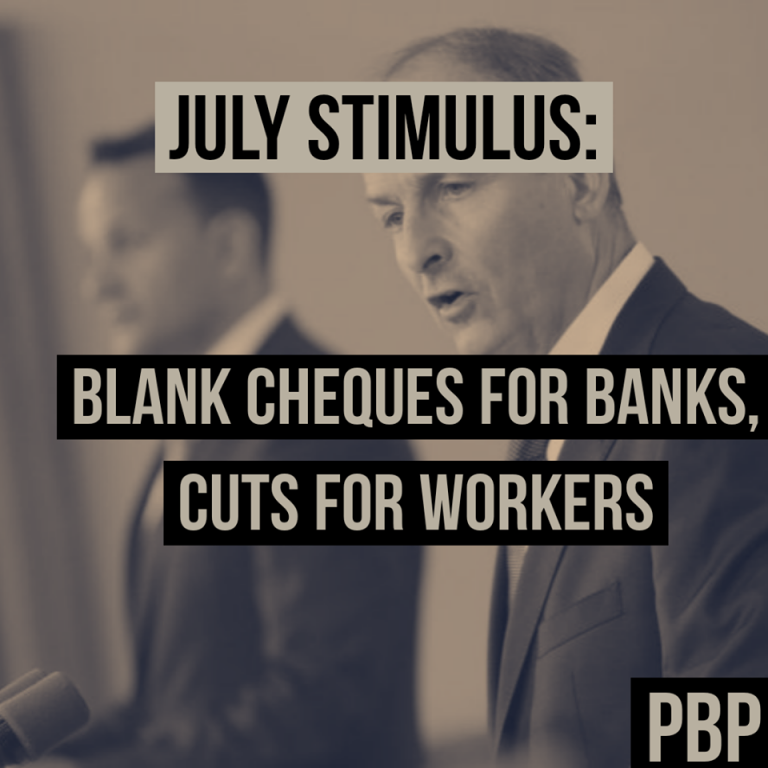 The Government’s stimulus package has all the hallmarks of a mindset shaped by decades of neoliberalism.
One small but symbolic measure typifies the attitude. If you can spend €625 on a holiday between October and April, you will get €125 back in a tax cut. But what worker on a low paid, precarious job will be taking that holiday.

The same attitude is evident in the Pandemic Unemployment Payment and the wage subsidy scheme. Both are being cut, pushing thousands into poverty. The wage subsidy scheme, which will be renamed as the Employment Wage Support Scheme, has been cut to €203 a week. But there is no obligation for employers to top it up to a full wage.

The Pandemic Unemployment Payment is also being cut because employers think it is a ’disincentive’ to taking up low paid jobs.

The biggest beneficiaries are the banks. They will be able to give out loans to businesses at a higher interest than is charged in most of Europe – and get a state back guarantee for up to 80%. In other words, if a business goes bankrupt and is unable to pay back the loan, the taxpayers pays the banks!
The main target of the stimulus package is private business under the pretense of job creation. But why give out corporate welfare in such quantities when the state could take on people directly?

Could the state not use most of the money to hire more nurses or teachers or builders who could undertake a state led retrofitting programme?
Could the state not employ an army of cleaners or give private creche owners the options of becoming state agencies and employing the workers directly?
But even such thoughts are regarded as ‘extreme’ in neoliberal Ireland, where the dogma is that the ‘state cannot provide jobs’.

The political establishment have just done a U-turn on their previous mantra that you could not ‘borrow your way out of a recession’. Now they borrow like there was no tomorrow to shore up private business.
And they will not even put some basic condition of companies who will get loans and grants. Like, they should be tax compliant; that they should pay their workers a living wage, or, God forbid, that they recognise unions.

The stimulus package has been cloaked in a rhetoric of ‘unprecedented’ or even, according to Eamon Ryan, ‘a practical example of the huge change we will be making as we meet our climate goal.
It is nothing of the sort – just the product of a tired old mindset of a political establishment whose first rule is ‘look after our own’ – the privileged.