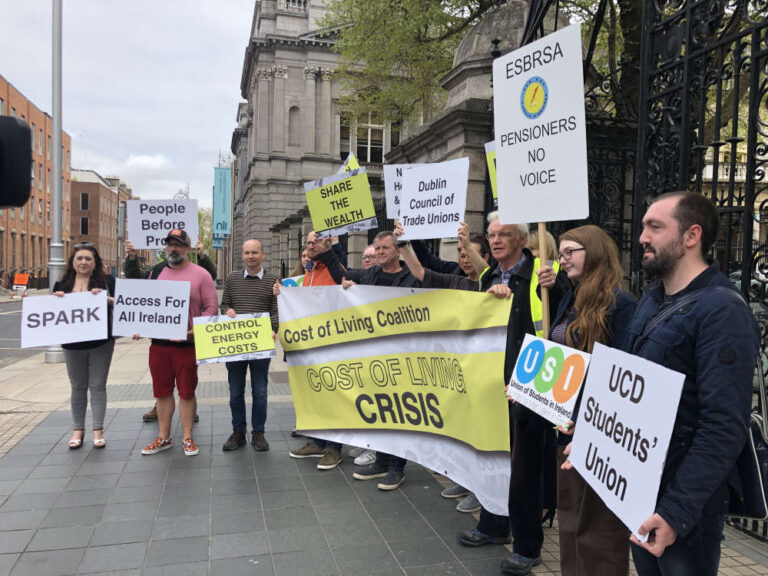 Freeze Prices Not The People

Electricity, gas and mortgages will see another round of huge price rises.

Meanwhile, this government does nothing even though they have the power to impose maximum price controls.

They could order banks to reduce the high mortgage rates that Irish homeowners already pay.

They could order banks to reduce the high mortgage rates that Irish homeowners already pay.

They could also reverse policies that have put profiteering ahead of the needs of people.

Electricity prices provide a good example of how wider policies impact n the cost of living.

Today Ireland has the fourth highest electricity prices in the EU. We are paying 26% more for electricity than the EU average.

Yet the ESB once provided the cheapest electricity for domestic users in the EU. Between 1986 and 2002, there were no price increases because the ESB did not operate on a for-profit basis.

This all changed when electricity was deregulated. In 1999, Fianna Fail introduced the Electricity Regulation Bill which opened the market to competition. Two years later, they removed the ‘not for profit’ mandate of the ESB.

In order to further entrench a domestic market for energy, the government and the Commission for Energy Regulation raised the price of electricity and gas to make it more attractive for private companies to enter the market. They also attached a PSU levy to electricity bills, which, at the time of writing, amounts to €58.57 annually. This money is used to subsidise private competitors of the ESB.

Energy supplier companies are also charged for moving energy throughout the deregulated system. These charges are then passed down to ordinary energy users, making up one-third of the household bill. There are special Transmission Use of System (TUoS) charges (or tariffs) paid by suppliers to Eirgrid and Gas Networks Ireland for using their transmission network, and Distribution Use of System (DUoS) tariffs paid to ESB Networks and Gas Networks Ireland to distribute the energy. All of this adds to extra prices.

The government could stop all this. They could impose a price cap on electricity and energy. It could reverse the policy of deregulation and give us cheap electricity. They could even follow the example of a right-wing government in France.

So the ‘we can do nothing’ mantra is just a  plain lie.

We need to protest and march to demand action.

Join the Cost of Living protest at the Dail protest on May 19th at 1pm.