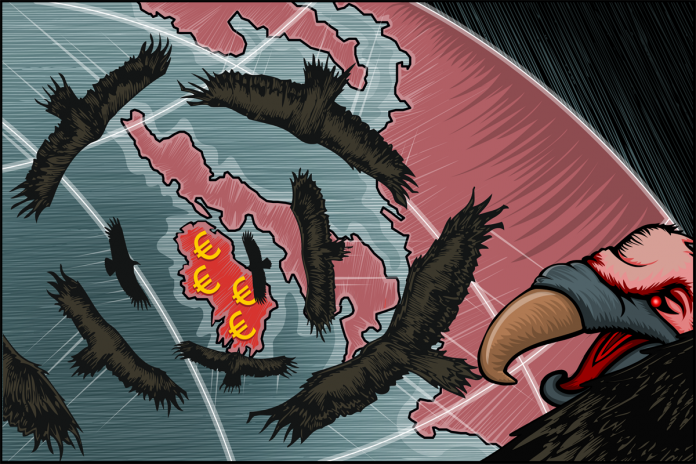 The decision of Permanent TSB to sell off distressed mortgages to vulture funds has raised the prospect of mass eviction for up to 14,000 households.

These funds bought up billions of Irish property at a fraction of it price. NAMA, for example sold off €7 billion of a portfolio known as Project Arrow for a mere €1 billion to Cerebrus.

The vulture funds now reckon that the time is ripe to start selling of some of this property. They want to use financial distress to evict mortgage so they can sell their property at a vast profit.

Last year there was a ten-fold increase in the number of High Court cases seeking evictions.

The political establishment are crying crocodile tears overall this. Fianna Fail have even brought in a bill to ‘regulate’ the vulture funds.

But FF and FG created the problem in the first place.

Fine Gael’s Michael Noonan took this one step further and held many meetings with them. Between 2013 and 2014, for example, there were no less than 65 meeting with vulture funds. The Department of Finance met private investment firms 26 times in 2015 and 34 times in 2016, with Minister Noonan present at six meetings

Fine Gael and Fianna Fail have also made sure that Ireland’s financial sector is poorly regulated and allowed to get away with paying virtually no tax.

Vulture funds are allowed to operate as ‘Special Purpose Vehicles’ and are not even monitored by the Central Bank.

They avail of specially created loopholes such as the Section 110 to avoid paying tax. As a result 15 vulture funds paid an average of just €250 each even though they held over €10 billion of assets.

If an Irish government were serious, they would change the tax laws to put the vulture funds under pressure.

That way, the vulture funds would be under ‘financial distress’ and more amenable to letting go their Irish property.

But FF and FG would never dare do that.