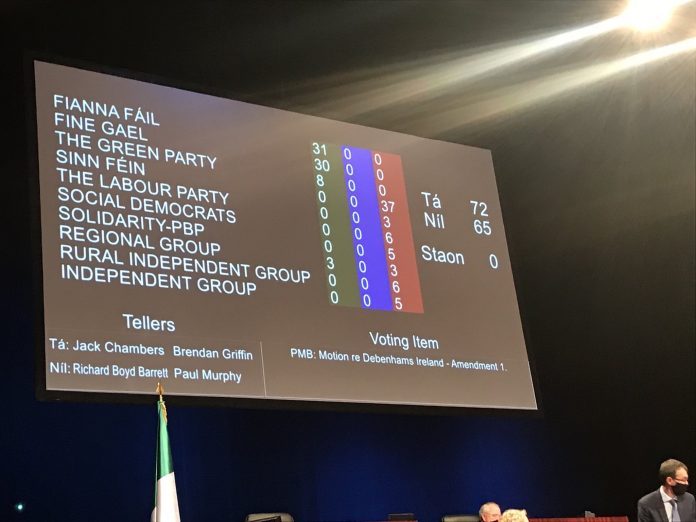 Last night the government gutted a Solidarity-People Before Profit motion in support of the Debenhams workers. The motion called on the government to:
“notify the liquidators in Debenhams that the State will forgo its priority as a creditor and instruct the liquidator to use funds realised instead to pay the enhanced redundancy payments agreed between the Debenhams workers and the company;
and
“immediately initiate negotiations with representatives of the Bank of Ireland to ensure the workers receive the full collective redundancy package previously agreed with the Debenhams company.”
The response from the government? Empty words of sympathy and the amending of the motion to the point where it was utterly meaningless. They replaced any concrete measures to give the workers their rights with two “reviews” and one “examine”.
The motion, now devoid of all of its original meaning, was then voted for by Fianna Fáil, Fine Gael and the Green Party.
Notably, half of Labour’s TDs did not turn up to vote for the S-PBP motion in a vote that came close to passing.
But the bulk of the blame lies undoubtedly with the three government parties, who have offered nothing but platitudes and left the Debenhams workers on the scrapheap.
But this isn’t over yet. The workers are determined to carry through their fight. They are maintaining their 24 hour pickets and are still preventing any stock from being removed from their shops. It is not the government who will decide the outcome of this dispute – it will be workers’ power.
Join People Before Profit