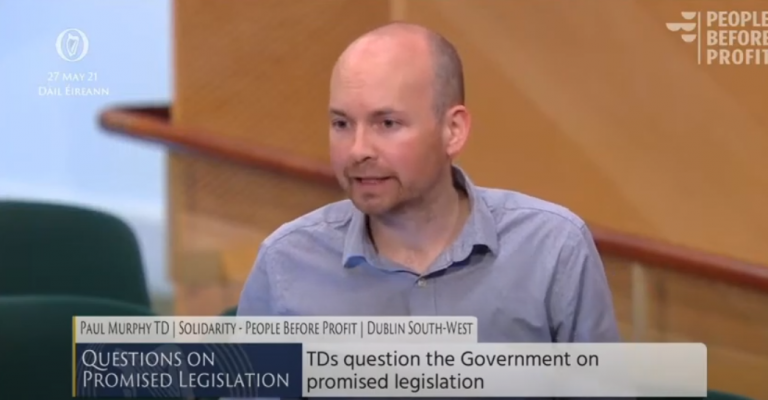 People Before Profit TD Paul Murphy has called on the government to introduce emergency legislation to prevent landlords from imposing rent increases of up to 8% once the current partial freeze on rent is lifted in July. This is happening because landlords are being allowed to impose last year’s 4% increase on top of this year’s increase.

The Tallaght TD said that legislation must be enacted urgently to prevent landlords from imposing these increases on tenants.

He said: “Last week it was clear that the Tánaiste was caught off guard on the issue of landlords imposing an effective double rent increase in one year. The reports that I have received from people about shocking levels of increases are truly disgraceful. But even in the normal course of events, this government, and successive governments, have presided over a housing crisis where renters have to tolerate a 4% increase on already unaffordable rent.

“I find it ironic that the Fine Gael by-election candidate in Dublin Bay South, Cllr. James Geoghegan, is calling for high rental costs to be addressed when his government and previous governments have done nothing to reduce rents or make renting in this country affordable for people.

“This situation cannot go on and the government must, as a matter of urgency, legislate to ban this practice. It should also reimpose a full freeze on rents immediately and at the same time impose a complete ban on evictions, at the very least until the end of the pandemic.”

On Thursday the Dáil will debate the People Before Profit Right to Housing Bill. This Bill, if enacted, would insert, via a referendum, the right to housing as part of the common good in the constitution and delimit private property rights in favour of the right to secure, affordable housing for all.

People Before Profit Housing spokesperson Richard Boyd Barrett TD today called on all parties in the Dáil to vote for this Bill.

He said: “The housing crisis is now simply out of control and the government seems unwilling to take effective action to resolve it. We are moving this Bill so that the right to housing can be included as part of the common good in the constitution.

“If this measure was put into the constitution it would remove the often cited constitutional obstacles to taking more radical action to deal with the housing and homelessness crisis.

“It would allow the government to ban evictions, impose real rent controls and bring rents back to affordable levels. No more could the government hide behind constitutional excuses, instead they would be legally required to take serious action on housing.

“I would make a particular appeal to the Green Party TD’s in the government that they should vote for this as their party voted for this measure back in 2017.”

Dail Set To Vote On Expulsion Of Israeli Ambassador Today