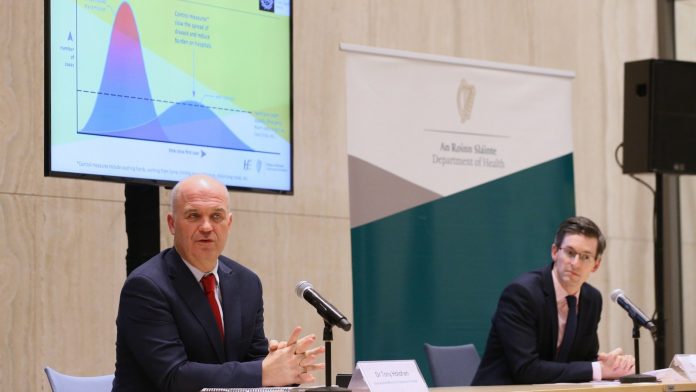 In a statement this afternoon, Richard Boyd Barrett TD expressed “deep frustration” at the repeated refusal of the government to answer direct questions about the advices they and NPHET have received from the Expert Advisory Group to guide their decisions and actions since the outbreak of the Covid-19 crisis.

In his statement, Deputy Boyd Barrett set out a chronology of the repeated questions and requests he has made since the end of February, about the government’s response to the Covid-19 emergency and in particular, about the minutes and advices of the Expert Advisory Group and ICU surge capacity.

Deputy Boyd Barrett pointed out that on 20 February at a briefing given by Ronan Glynn, Deputy Chief Medical Officer, for Oireachtas members, which only his office attended, his representative asked for a copy of the power point presentation and the modelling for projected surge capacity requirements and the advice that was informing public health measures.  This was promised but never received.

These questions were asked again in writing on 25 February, but no answers were received.

On 10 March the questions were asked again in writing, no answers were received.

On 16 March Deputy Boyd Barrett again asked in writing for a list of the members of Expert Advisory Group, the minutes of its meetings, the advices given by it to NPHET and DoH.  Again, he received no reply.

The government then introduced a new enquiries line and Deputy Boyd Barrett submitted 56 questions for the first deadline on 8 April, which included many of the previously unanswered questions dating back to end of February and early March.  On 17 April replies were received but only 8 of the 56 asked of the Department of Health were answered.

Critically the questions on the make-up, minutes and advices of the Expert Advisory Group and the modelling for ICU surge capacity were still not answered and to date no replies have been received.

Deputy Boyd Barrett also raised the refusal of the government to respond to his questions on the Expert Advisory Group in the Dáil last Thursday 23 April.

These same questions have been resubmitted this morning, 28 April, for the latest deadline.

Deputy Boyd Barrett said: “It is incredibly frustrating and totally unacceptable that since the end of February, over two months ago, I have still not received answers to basic questions about the expert advices given to the government and NPHET on which we are told they are basing all their decisions and similarly they have refused to answer a fundamentally important question about their projections and preparedness in terms of ICU surge capacity.

“All international advice about health emergencies and pandemics is that you must establish and maintain public trust and have absolute openness and transparency about the rationale for public health measures yet, the government has systematically and repeatedly refused to answer the legitimate enquiries of an elected member of the Dáil on key issues relating to their response to the Covid-19 crisis.  It simply beggars belief and does nothing to engender confidence and public trust.

“The issue of NPHET not publishing their minutes was raised last week, but of even greater importance, that I have been asking about for more than 2 months now, are the minutes and advices of the Expert Advisory Group on which we are told NPHET and the government are basing their decisions.

“If we are to have the public confidence and transparency necessary to guide us out of the current crisis and to even consider lifting public health restrictions it is absolutely critical that all the minutes and guidance from the Expert Advisory Group are made public.

“How else can we have genuine accountability and know that the government are, as they claim, making decisions on the basis of expert and public health advice?  So I am calling once again on the government to answer the questions I have asked and to publish immediately all the minutes and written advices of the Expert Advisory Group since the outbreak of the crisis up to and including their latest advices on the plans to lift the restrictions and safely exit the current lockdown. This is the only way we will achieve the public confidence and trust that is necessary.”