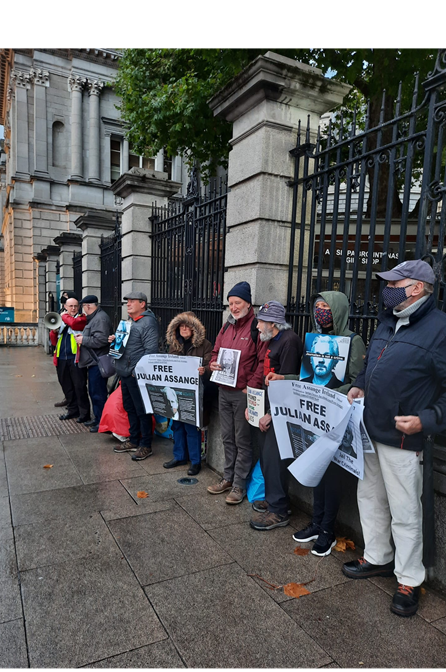 The Irish Anti War Movement, along with several other anti-war and social justice groups in Ireland, has written an open letter to Irish Foreign Minister Simon Coveney calling on him to lobby by all means necessary, including via Ireland’s current membership of the United Nations Security Council, the British and United States Governments, to release the campaigning Wikileaks editor and journalist, Julian Assange.

The letter, now launched as an Uplift campaign, can be viewed and signed here – https://my.uplift.ie/petitions/ask-minister-simon-coveney-to-speak-up-for-julian-assange

A series of solidarity events for Julian Assange organised by Free Assange Ireland and supported by the IAWM were held across  the island of Ireland from Dublin to Galway and from Derry to Kerry on  Saturday 23rd October.

The hearing of the appeal by the US Government at the end of October against the decision of a British Court not to extradite him to the USA is a very serious move. US prosecutors have indicted Assange on 17 espionage charges and one charge of computer misuse over WikiLeaks’ publication of thousands of leaked military and diplomatic documents. These could lead to a long prison sentence in the US. Assange’s lawyer has  accused US lawyers of seeking to “minimise the severity of Mr Assange’s mental disorder and suicide risk”.

“This is clearly a politically motivated case simply because Julian Assange exposed US military and other war crimes, human rights abuses and corruption in the US-led wars in Afghanistan and Iraq. He spoke truth to power and has been vindicated. His continued incarceration and threatened extradition to the US is a threat not only to him but to all journalists, editors and publishers, to the cause of investigative journalism, to press freedom and to freedom of speech generally. That is why the IAWM along with others are calling on Minister Simon Coveney to speak up for Julian Assange and to use his influence to call for his immediate release.“