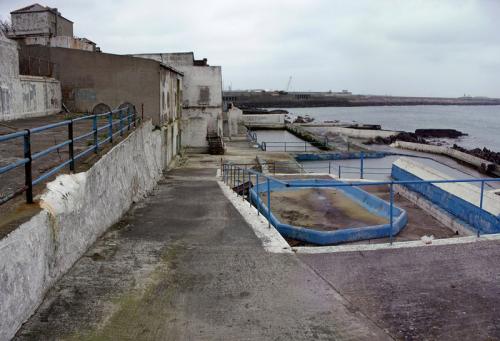 Five years since the people marched…

WHERE ARE OUR BATHS? – Public Swimming Amenity Now!

Members of the Save Our Seafront group (SOS) – the group that organised protests of thousands a number of years ago against plans to build apartments on the Dun Laoghaire Baths site – will campaign this weekend during the Dun Laoghaire Festival of World Cultures, calling for action by the Council to restore the derelict baths as a public swimming amenity.

SOS campaigners, along with many local residents, are now very frustrated that it is five years since huge numbers of local residents marched on the Baths issue and yet, despite promises, still no action has been taken by the Council to restore the baths.

SOS will have a visible presence on Saturday and Sunday of the Festival near the baths, accompanied by a large banner saying: “Give us our baths now!” and intend to distribute thousands of leaflets to festival goers.

The SOS leaflets will also advertise a public meeting on the issue of the Baths that will take place the following week, on Wednesday July 26th at 7.30pm in the Kingston Hotel, on Dun Laoghaire’s seafront. Cllr Richard Boyd Barrett, chairperson of SOS said:
“Local people are totally fed up waiting for something to be done about the baths. When we marched five years ago and defeated the Council’s plans to put an apartment block on the site, we were promised the Baths would be restored as a public swimming amenity. We are still waiting! We’ve had sub-committees on the issue, reports, and almost €200,000 wasted on crazy consultant’s proposals, and yet still the baths still remain derelict. It’s just not good enough.

Since being elected to the Council last July, SOS chairperson, I have tabled numerous motions and questions requesting action on the issue and asking to see the plans, the Council say they are drafting.

Last summer, I was told plans for a public amenity would be unveiled at the end of 2009. Last September, I was told it would be early in 2010! In early 2010, the unveiling date was put back to May!! In May, I was told, June!!! In June, I was told told, July!!!! In July, the Council was informed the plans won’t be unveiled in September!!!!! It just goes on and on and meanwhile a once superb amenity sits on the seafront as a derelict eyesore. This just cannot be allowed to go on.

It is also very frustrating that while the Council is now moving ahead with plans to spend €10-20 million on a new library headquarters on the Green in Moran’s Park, while it continues stalling on the baths. Of course, improved library facilities are always to be welcomed but it is odd that this plan is moving ahead when Sallynoggin library was recently closed down and the Baths continues to sit derelict. The Council’s priorities seem to bear no relation to what the people want.

The failure to progress the restoration of Dun Laoghaire Baths is particularly amazing given the stated commitment of all the main parties in the area to the issue. In Dun Laoghaire we now have two Fianna Fail Ministers; a Green Party Minister; a Fine Gael front bencher; and the leader of the Labour Party. Yet, five years on, we are still waiting.

SOS believes enough is enough. Once again, we need public pressure and people power to force action on the Baths. We should not allow another summer to pass without the Council presenting a plan for a public swimming amenity at the baths and setting out a clear timetable for the restoration works.

For a tiny fraction of the money being poured into the black-hole of Anglo-Irish Bank, the baths could be restored. A restored baths would be a major boost to Dun Laoghaire economically, as well as providing a valuable family and social amenity for the area.

SOS will be campaigning during this year’s festival of world cultures in the hope of pressuring the Council into action on restoring the baths.

We are also holding a public meeting on Wednesday July 28th at 7.30pm in the Kingston Hotel, Dun Laoghaire to discuss how we can crank up the campaign on the Baths.

The meeting will also report on other important seafront issues, such as: the Carlisle Pier, Bulloch Harbour, Blackrock Baths and Sandycove Green.”