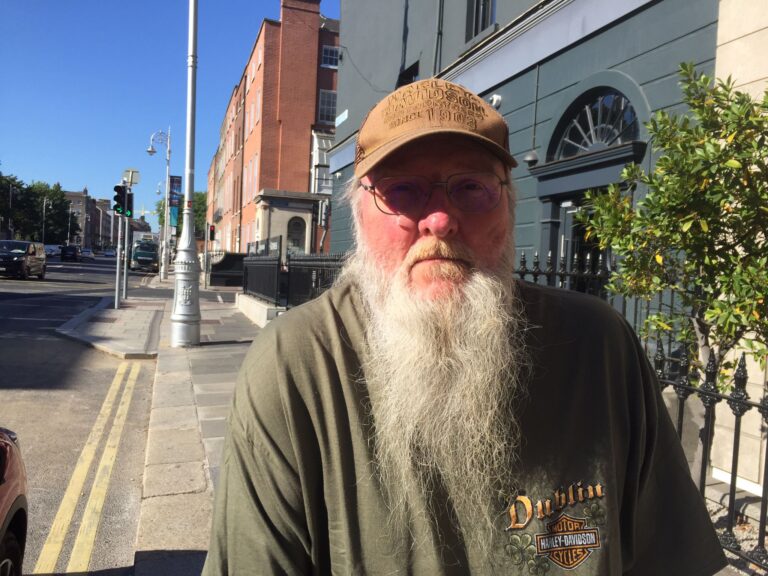 Ray Kemble is not an activist. He’s a worker whose life has been torn apart by the gas industry in the US which sees Pennsylvania’s rural communities as sacrifice zones for profits in the lucrative trade in Liquified Natural Gas (LNG).

After a stint in the military Kemble ran a garage in rural northeast Pennsylvania. ‘We had three tow trucks,’ he said. ‘We could take the kids to Disneyland. We were doing alright.’ But after land near his home in Dimock, Pennsylvania was leased to natural gas extraction companies, he voiced hesitancy about water quality. Suddenly things became difficult.

‘I had the AAA (car servicing franchise) deal for the area’. But because he opposed the fracking industry which his isolated neighbours and local workers came to rely on, he was blackballed. ‘They wouldn’t let us on the pad (the fracking worksite). We lost the contract.’

At home the well water he’d depended on deteriorated to the degree that he can’t use it anymore. The area around Dimock saw dramatic increases in cancers. Property values dropped.

He’s fighting the poverty and ongoing health issues the industry brings to locals who often have no choice and no way out. Promises from elected representatives and constitutional rights mean little once the industry buys in: ‘We have a right in the Pennsylvania constitution to clean air, clean water, clean soil now and in the future.’ But he smiles bitterly saying his tap water now smells like ‘a mix of skunk a** and cleaning chemicals’. The Attorney General who was supposed to prosecute the companies responsible is now silent on the issue and running for state governor.

With his business unsustainable and no other employment locally, he had to take work as a fracking truck driver. 12-hour shifts were the norm. He showed chemical burns on his hands.

‘If you talked about a union you’d be run off the site.’ If night time drivers didn’t show up, he could end up working 24 hours, or even 36.

He said driver accidents, some fatal, were covered up by the police who are allowed to work as private security for the fracking companies in their off hours. The same private security would be called to keep the trade union organisers off the sites.

Recently he’s been working to keep a company called Eureka from setting up a chemical extraction fracking wastewater processing site from being established upstream from his home, while trying to get the state to provide safe piped water from the nearest public supply. Fighting to get safe piped water in has been a 10-year struggle. This is not a story he wishes on any rural community.

Sharing his story at #ClimateCampIreland

He came to Ireland to share what the frackers have done in Pennsylvania because he recognises how important international links are in the fight against the international LNG trade. The gas from Pennsylvania could well end up here in Ireland as to keep data centres going.

Invited to participate at the Climate Camp Ireland Kerry last week, he joined activists (from XR, Fridays For Future, Friends of the Earth, Futureproof Clare and People Before Profit) on Thursday outside the Dail in Dublin. Together they demanded the government commit to opposing Liquified Natural Gas terminal in Tarbert in North Kerry, which inevitably worsens climate change and destroys the water sources by increasing demand for fracked gas. The activists expressed fears that Ireland’s ban on fracking could be overturned.

After the Dáil protest, Kemble in his wheelchair, helped lead a colourful march from Varadkar’s Department of Enterprise, Trade and Employment to Fianna Fáil headquarters and finally to Fine Gael headquarters on Mount Street with the aim of delivering a letter expressing their concerns. At Fine Gael, the door was shut in Kemble’s face. The letter, refused.

‘Everybody better get on the same page real quick.’

His story is a stark warning to those of us fighting for working people and eco-socialism: build international links and don’t depend on the laws to protect you. His experience of having doors shut in his face here echoed his experience in Pennsylvania.

‘What good is having the law if there’s no one to enforce the law? Where do you go? Same thing I saw over there, I saw here yesterday,’ Kemble said. ‘Politicians hiding behind closed doors. They open up and they see you and they slam the door and don’t want to talk about it. Same thing in the states.’

Law enforcement, government politicians and parties, even the departments of transportation and justice seem to be bent to the will of the energy companies.

‘Industry can do whatever they want. There’s two sets of laws: one for industry, no law for us.’ he observed. ‘Everybody better get on the same page real quick.’