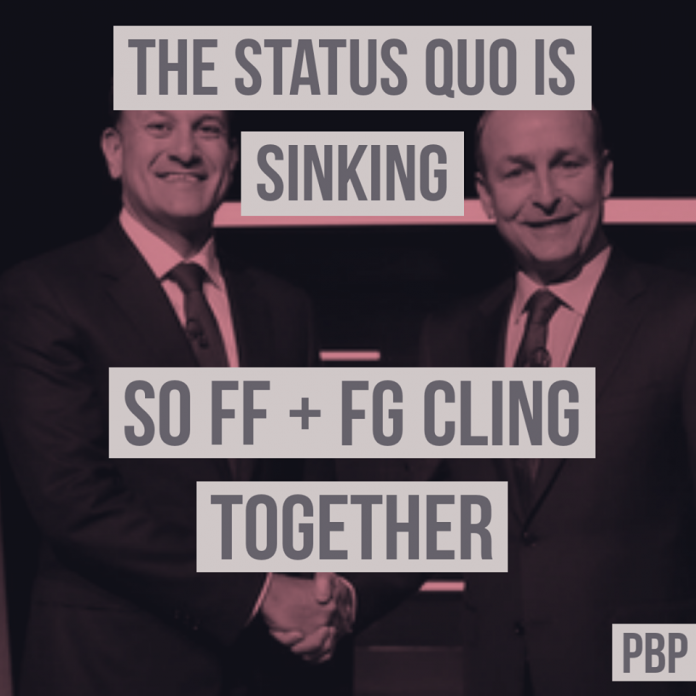 The result of the election earlier this year was an obvious demand for change. Fianna Fáil and Fine Gael have run this country for decades. Their policies brought:

The latest news of a joint policy document for a new coalition government is the just the next step in their stitch up game. Fianna Fáil and Fine Gael have no intention of giving up on their sense of entitlement to run this country as they have done for almost 100 years. Together they form the backbone of the political establishment and play a gentleman’s game of swapping turns at government.

Their tactic has been to pretend that there are fundamental differences that arise from a civil war fought in 1922. They exist as separate parties only to shoehorn the electorate into backing some form of conservative policies.

Today, however, they are at an historically weak point as even combined they cannot form a majority government. Instead, they are forced to present themselves as converted agents for the change that dealt them their electoral defeat.

The onus is now on the parties and independents who benefited from the wave for change to categorically rule out coalition with the two establishment parties. The shadow of the Covid-19 crisis is no excuse to prop up the parties whose misguided policies degraded the capacity and resources of the public health system and other key services which we need so badly in the crisis we now face.

We appeal to other parties and independents of the left to renew efforts to bring about a left government and the genuinely radical change that this Covid-19 crisis confirms we urgently need rather than make the mistake of once again propping up FG/FF.

A left government that truly learned the lessons of the current emergency would, for example immediately establish a fully funded, single tier national health service and bring all the private health and industrial capacity needed to resource that service, under public control. It would also take the sort of truly radical measures on housing, climate change, childcare and workers’ rights that this government refuses to because of its addiction to the market system.