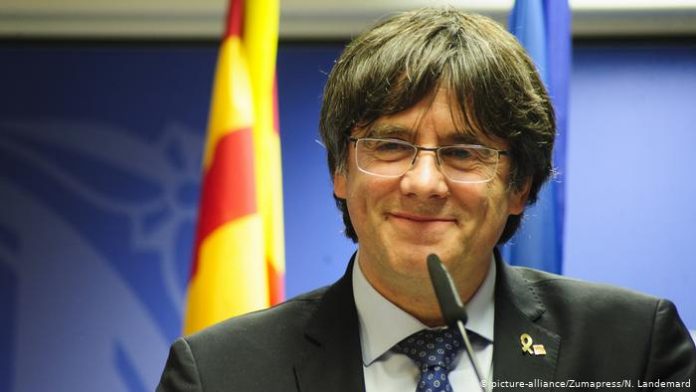 “Following our successful People Before Profit motion, we are delighted to receive confirmation that former Catalan President Carles Puigdemont (MEP) will visit Derry on May 5 for a presentation to Derry and Strabane Council.
Puigdemont was unjustly forced into exile for holding the democratic referendum for Catalan self-determination on October 1 2017.
People Before Profit won the support of Derry and Strabane Council for our motion inviting Puigdemont; giving full solidarity to the peaceful Catalan demand for justice; for Spanish authorities to end the attempt to repress, criminalise and imprison the movement for independence; for prison sentences on Catalan leaders to be rescinded; and for the leaders of the EU to end their complicity with the Spanish state’s attempt to crush the democratic aspiration of the Catalan people.
We call people in Derry and across Ireland to demonstrate their solidarity with the Catalan cause by welcoming Carles Puigdemont here on May 5 and to join the call for the Spanish authorities to immediately rescind jail sentences of Catalan self-determination supporters.”
The full People Before Profit motion to Derry and Strabane Council:

“The decision to imprison the political leadership for giving effect to the democratic will of the Catalan people will inevitably backfire on Spain. There is now only one possible route that the Catalan nation can follow. If Catalonia is to survive and to protect its institutions and culture, it must now become an independent state in the form of a republic. We will never back down.” –

Council stands in solidarity with the people of Catalonia in their democratic demand for self-determination and independence.

Council calls on the European Union to ends its silence and complicity with the Spanish government’s violent repression, denial of democratic rights and, now, imprisonment of Catalan leaders.

Council will invite a Catalan representative for a presentation to Council.