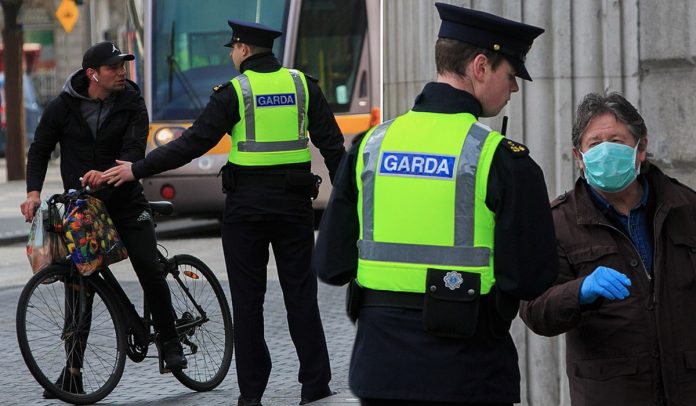 Much like the self-certification rules that led to the construction of sub-standard building of inferior houses and apartments in Ireland, the criteria defining essential and non-essential workplaces, published under the Public Heath guidelines for the duration of the Covid 19 crisis, once again removes the onus of responsibility from any arm of the government.

The guidance clearly states that employers need only identify if their organisation is providing an essential service, with no clear indication as to what level their sector actually benefits the industry which they serve.

As a result, many workers are being forced to return to workplaces where vague instructions in both the provision of safety and the meaningfulness of their roles are common place.

Under new found Garda powers, if a person is found outside their home without “reasonable excuse”, they are subject to a fine of €2,500 and/or up to six months in prison. The Garda Commissioner Drew Harris has actively called on the public to report people “blatantly” flouting the lock-down measures.

No such measures of enforcement exist for business getting ‘back to normal’. Employees have frequently contact the People Before Profit Workers’ Helpline asking for guidance on whom to contact on clear breaches of safety in the workplace.

When questioned by Brid Smith TD, the Minister for Business and Enterprise stated that in 121 cases of complaints to her office “employers were made aware of the relevant information and advice”. Despite the department publishing phone numbers to both the HSA and the HSE for concerned employees, both of these organisations claim that they have no control over rogue employers. The Gardai will not entertain any such complaints either.

As was demonstrated last week at the break-up of a Debenhams workers protest, held within all of the regulations of advice and restriction of the WHO, the Gardai, just as they do in situations of evictions, are very clear who they represent on behalf of the government- the landlord and the business classes.