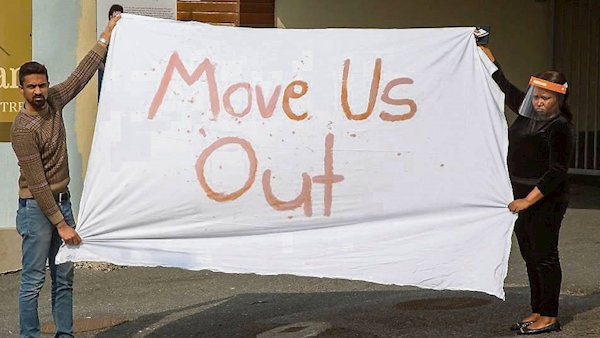 Amnesty for all asylum seekers now!

A powerful socially distanced protest was held at the Dáil today against the health crisis currently unfolding in Direct Provision Centres across the country. The protest was called by United Against Racism in conjunction with MASI (Movement of Asylum Seekers in Ireland) and People Before Profit TD, Bríd Smith. The protest was attended by four TDs, Brid Smith herself, Gino Kenny, Richard Boyd Barrett of PBP and Paul Murphy of RISE.

There were similar protests around the country including Miltown Malbay, Galway, Waterford, and, most importantly, Cahersiveen where 100 local people turned out in a magnificent display of solidarity with the asylum seekers trapped in the Skellig Star. During the rally at the Dáil there was a live telephone link with the rallies  in Miltown Malbay and Cahirsiveen.

The following statement was received from the Áina Rynne at the Rally in Miltown Malbay:

“We in Miltown Malbay are calling for the government to grant asylum to all asylum seekers in Ireland. The emergency Direct Provision centre in our town is not fit for purpose and during this pandemic, it is clearly not suitable to provide basic living conditions for the residents. They are unable to socially distance and are living in fear. Our town has been a successful example of integration with asylum seekers who are now our friends and important members of the community. We want to show solidarity with the asylum seekers in our community and across Ireland, who are living in such inhumane conditions. Many asylum seekers are doctors, nurses and healthcare workers and want to contribute to the fight against C19. We are appalled at the lack of compassion or urgent action from the Department of Justice and Minister Charlie Flanagan”.

And the following message came from Cahersiveen to Bríd Smith TD:

Bríd Smith commented: “Today was a superb statement by Irish people, in the difficult circumstances of Covid-19 restrictions, of solidarity with our sisters and brothers in Direct Provision. Today we refused to be divided by racism, bigotry or fear and said with one voice: Amnesty for all asylum seekers now! End Direct Provision! Refugees are welcome here! We just hope Charlie Flanagan and the Government are listening.”