Divide And Crumble Or Unite And Win Full Redress 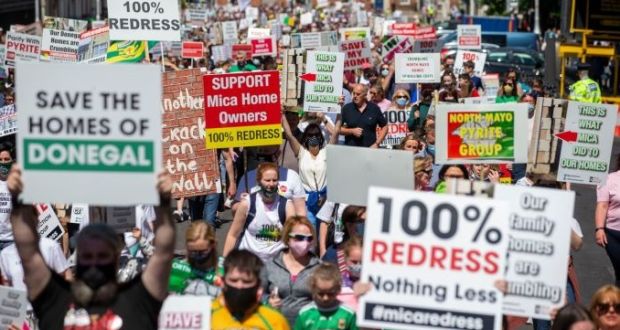 The Mica scandal is a microcosm of the failings of the Irish political system and its current government. It is a crumbling monument to all that is wrong with a corrupt Irish construction sector. Thousands of homes built during the Celtic Tiger era are now collapsing thanks to completely inadequate government regulations and the greedy profit motives of the private industry. Thousands of families are now living in real fear every single day and have been left in a state of absolute despair for years by a government elected to protect and serve them.

The government of Fianna Fáil, Fine Gael & the Green Party have a responsibility to act immediately to ensure that the right to a standard of living adequate for health and wellbeing, through housing, is upheld for all its citizens.  The irony has not been lost on the Mica homeowners that the business interests of the Irish elite were conveniently saved by the €64 billion obtained to bail out the banks in 2009, yet the provision of a €1 billion solution to address this scandal has been ignored, drawn out and dangerously delayed for too many years. The government didn’t have to think twice when it gifted failed property developers €74 billion through NAMA. It’s high time they bailed out the people affected by this Mica scandal.

A closer look at existing plans shows that the idea that the government will only pay 90% of expenses, up to a maximum of €247,500 is nonsensical. If a claimant’s expenses come to €100,000 and they receive €90,000, this leaves a gap of €10,000 to be found by the claimant. If other claimants’ expenses are €200,000 then they receive €180,000, leaving a gap of €20,000. These percentages are not a rational metric when it comes to Mica redress. Full redress is the only way to avoid all these ridiculous contradictions and unnecessary obstacles.

Are they suggesting it’s adequate to give one claimant €180,000 but not to give someone else €100,000? The cost of original construction and the cost of reconstruction today are subject to macroeconomic conditions and factors that are beyond the control or ken of the homeowners. It is highly unlikely that any homeowner would build or buy a home costing €300,000 if they knew in future it would cost them another €74,750 to reconstruct it due to issues that they had no awareness or control over.

More importantly it is likely that very many people, faced with a bill in the tens of thousands, will not be able to access the scheme due to a lack of savings and the difficulty of getting credit in the current COVID-19 affected economic future. For most it is simply unaffordable and unachievable.

Papering Over The Cracks

On the 15th June, thousands of people from the Northwest descended on Dublin in peaceful protest for 100% redress.  The streets around Dáil Eireann were awash with green and gold Donegal football jerseys. Brazen government politicians fronted the crowd with rabble-rousing speeches that said nothing and promised even less. Fine Gael TD for Donegal Joe McHugh patronisingly welcomed the people of Donegal “to the heart of democracy”and went on to express his “hope” that the government – of which he is a part – “ratifies this wrong”.

The Mica crisis is not an anomaly that applies only to Donegal and the Northwest. The heart of the problem is a nationwide culture of corruption in construction and a blind eye turned to bad practice and greed that starts at the very top, in government.

We should all reject any suggestion that this scandal is exceptional to Donegal and the Northwest. This intentionally brushes over decades of incompetence and corruption in the construction industry and government. In the Celtic Tiger era, the government permitted building developments on flood plains, hundreds of thousands of homes to be poorly built with inadequate insulation, huge wind farms in inappropriate locations, and quarries to act with impunity. The Irish state put profits ahead of its people and the environment.

We must stand firm and demand that 100% of the Mica costs are covered for those affected. These include storage, rent, surveying, building costs, legal costs, counselling, and compensation. If the homes of Micheál Martin, Leo Varadkar, Eamon Ryan or any of the mansions of the Irish business elite were destroyed by Mica, there is no doubt that 100% redress would be instant. There would be no need for them to go through the weeks, months and years of stressful campaigning and fighting to obtain what should be theirs by right.

What should be done?

People Before Profit call on the Dáil government to immediately provide full redress and begin the demolition and like-for-like rebuilding of all affected homes and cease its insidious use of divide and conquer tactics on the homeowners affected. It is imperative that a state-owned construction company is established for this complete reconstruction. This will ensure that the full expenditure will be concentrated on the building costs with any profit motive removed or greatly reduced with cost efficiency maximised through bulk purchasing.  No doubt, the greedy private interest vultures are circling around the Mica scandal.  Those whose mentality is to never let a crisis go to waste looking to exploit the misery of those affected and to get their hands deeper into the public purse.

The people who should pay are those responsible. The quarry owners, developers, speculators, banks, insurance companies who are deeply embedded in elite Irish Golden Circle. If the government chooses to hide behind these, with whom they are often connected with, then they must assume the responsibility for the 100% redress in the interim. The recouping of monies should be secondary to addressing the issue. It can be done by a future government elected because they are not compromised by connections with the business elites.

Included in the 100% redress should be the initial engineer assessment, the cost of temporary accommodation, re-decoration and the establishment of a public inquiry.

People Before Profit want complete transparency on all property development and housing issues, and full accountability from government with a full independent inquiry that ends the unscrupulous activities of those who monstrously benefit from exploiting the housing crisis and the construction industry.

The people of Ireland must act.

People power and protest is what mainstream politicians fear the most. They want us to believe change can only happen at election time and that Irish people don’t protest! Ireland has a very effective history of protest. If we want to genuinely transform the corrupt construction industry and address the Mica scandal, then it will be as a result of the whole of Ireland actively organizing and demanding that we always put people ahead of profit.

The Irish Government was able to contain the thousands of predominantly Green and Gold protestors who took to the streets on the 15th of June.  What they do not want is tens of thousands from all over Ireland converging on Dáil Eireann in a sea of colours representing every single 32 counties.  The people of Ireland should be fully aware that a government that can so blatantly ignore the health and wellbeing of any of its citizens can also do the same to them.

Almost everyone in Ireland knew that ‘we’ taxed multinationals at 12.5%. The 12.5% rate was Ireland’s sacred cow. When People Before Profit representatives called for