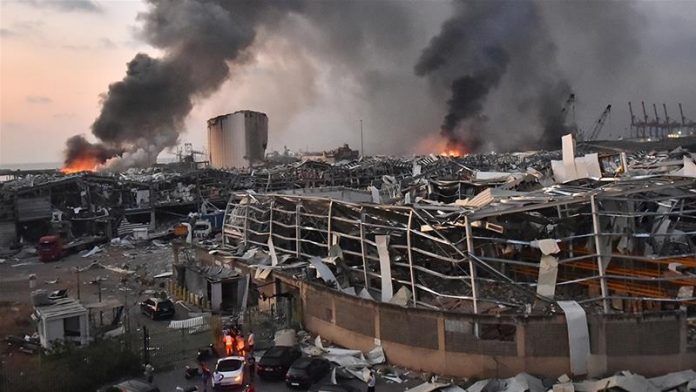 An enormous explosion in Lebanon’s capital Beirut on Tuesday will cause more misery for ordinary people – and could spur further rage at the government.

More than 100 people were killed in the explosion in Beirut’s port, which destroyed buildings for miles around. Some 4,000 more were injured and several people remain buried beneath the rubble.

The blast, apparently when a huge store of the explosive chemical ammonium nitrate somehow ignited, also destroyed Lebanon’s only port.

That will be a severe blow to Lebanon’s economy, already in a deep crisis. Ordinary people – already raging at government corruption and being made to pay for the crisis – face new hardships.

Tens of thousands of people in Lebanon have joined waves of protests that first began last year against austerity and government corruption.

The most recent protests, on Tuesday – the day of the blast, expressed fury over power cuts that last up to 22 hours a day. They followed protests in May as poverty soared in the wake of a banking crisis.

And in 2019 a movement erupted after the government attempted to tax WhatsApp messages. It quickly grew into a movement against corruption.

As ordinary people were made to pay, they grew furious at a ruling elite – from all political parties and factions – that enriched themselves.

Some 60 percent of Lebanon’s population were already expected to be below the poverty line by the end of the year. Now that the blast has destroyed Lebanon’s only port—in a country that relies heavily on food and fuel imports—the crisis will be even worse.

There is also fresh anger and questions that could pin the responsibility for the explosion on Lebanon’s rulers.

Reports suggest the 2,700 tons of ammonium nitrate came from a ship that had been detained in Beirut in 2013. It was removed from the vessel in 2014 and stored in a nearby warehouse.

Lebanese customs officials wrote letters to the courts at least six times from 2014 to 2017, seeking guidance on how to dispose of the highly combustible material. But no action was taken.

As recently as six months ago, officials inspecting the consignment warned that if it were not moved it would “blow up all of Beirut”.