Déise Five Are An Inspiration To All Workers 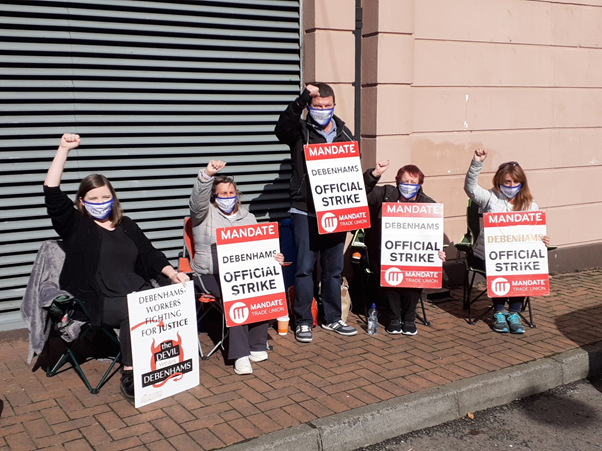 The five workers who occupied the Debenhams Store in Waterford have shown inspiring determination and courage, according to Úna Dunphy of People Before Profit.

Workers facing the hostility of aggressive businesses while the Government watches from the sidelines, can take heart from the brave actions and endurance of the Debenhams workers, and the grassroot trade unionists and workers who have joined in their campaign for a just redundancy settlement.

Following their occupation of the Debenhams store in City Square Waterford, the Déise Five went straight back on the picket line to continue the fight, vowing that stock will never leave the store until such time as a just settlement is put in place for the workers.

The Déise Five had met with Fianna Fáil Minister Mary Butler and Green Party TD Marc O Cathasaigh, and insisted that workable solutions have been put forward to the Government and KPMG, to achieve the enhanced redundancy. These include settling the workers’ claim for four weeks redundancy per year of service with funds accrued from the sale of stock, or the State stepping aside and allowing the monies currently being claimed by Revenue from the Liquidator, KPMG, be used to meet the workers’ demands. Workers representatives should fully participate in any additional process to implement the Duffy/Cahill proposals.

Both Deputies Butler and O’Cathasaigh, refused to sign the Mandate Trade Union pledge on the picket.

Calling for support for the strikers, Ms Dunphy emphasised that thousands of workers are losing their jobs or barely holding on to precarious work, while the Government relies on aggressive, profiteering corporations to control the economy.  She urged the public to demand a political response from their Fianna Fáil, Fine Gael and the Green Party representatives through a Private Members Bill allowing workers, whose employer hasn’t yet completed the liquidation process to avail of enhanced redundancy packages above the statutory minimum, based on negotiated agreements between the employer and their workers’ trade union.

The response of KPMG was to escalate the dispute on Sunday in the middle of a storm, when they sent a lorry, seemingly escorted by the Gardaí, expecting to get packing equipment into the store to remove stock. Not a hope.  The workers sent out an alert and there was a huge mobilisation within minutes.

This, said Úna Dunphy, is the most important struggle for justice faced by workers in Ireland today, and the victory of the Debenhams workers will be a victory for all.

People Before Profit Welcomes Wrc Cases Being Held In Public, But Wants Legislation To Go Further

People Before Profit Waterford welcomes the Supreme Court ruling that will impact on the WRC being held in public, and urges the Minister with responsibility

HSE should requisition hotels for use Following the news mandatory hotel quarantine bookings have had to be paused due to lack of spaces, Paul Murphy

Following two nights of rioting in West Belfast, People Before Profit MLA Gerry Carroll has called for calm, stating that the way forward is to