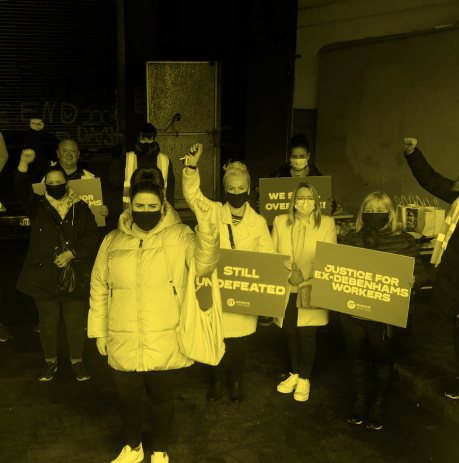 On Thursday April 1st Debenhams workers at Blanchardstown Shopping Centre were forcibly removed, by Gardai, out of the path of trucks which were removing stock form the Debenhams store in the Centre.  This removal of stock was in breach the Level 5 Lockdown, yet the Gardai did nothing to stop it. Instead the names of workers and their supporters, who were there to stop this activity, had their names taken and were threatened with fines for being in breach of Covid 19 restrictions.

It subsequently emerged that the liquidator, KPMG, had gone to the courts in February to get an order which included “an express direction that members of An Garda Síochána assist the Liquidators when called upon to do so.” This was clearly interpreted to mean that the Gardaí should assist the liquidator in breaching a Level 5 Lockdown.

This is a simple illustration of how our society works: one law for the employers and another for the workers. Workers who, one year ago, were told by email that their jobs were gone. Workers who, one year ago, were told they would not be paid their entitlement to two weeks’ redundancy pay per year of service, in addition to statutory redundancy, would not be paid.  Workers, who for one year, and despite a Pandemic, have fought a dignified campaign for justice. Workers who have widespread public support but who have been failed at every opportunity by the current government. Despite many crocodile tears all that has been offer is a €3m training fund which will be of no value to many of the workers who have given long service to Debenhams and are close to retirement.

Their campaign has implications for all workers and will benefit all workers if promised legislation to implement the Duffy Cahill Report is implemented.  This report was published in April 2016 following the closure of Clerys, and if implemented would have given some protection to the Debenhams workers and others, such as Arcadia workers, who have enhanced redundancy agreements.  Both Fine Gael and Fianna Fáil have effectively been in government since then and did nothing to implement legislation to facilitate the implementation of the Duffy Cahill Report.

The current government has refused to meet the demands of the Debenhams workers and claimed there is no precedent for them to be paid despite clear precedents in Clery’s and IBRC. But worse, both the Taoiseach and Tánaiste have claimed the state has done right by the Debenham’s workers by ensuring the state paid their statutory redundancy.  The way they are talking you might think they paid the workers themselves. But in fact the workers are just getting back what they paid in PRSI over the years.  I estimate that the Debenhams pay bill was around €29m in 2019 with the workers paying just over €1m in PRSI. Another €2m was paid in employers PRSI.  And that was just for one year. Some of these workers have been working for over 20 years. The cost of their statutory redundancy is well covered.

Given this and the extraordinary measures that have been taken across the economy surely we should consider allowing for the payments of additional redundancy entitlements. This could be funded by a Covid solidarity wealth contribution. Oxfam’s Inequality Virus report shows that the fortunes of Irish billionaires increased by €3.3 billion since the pandemic started. At a minimum the €3m training fund should be converted into cash for the workers.

Given the fantastic fight these workers have put up a lasting legacy will be to ensure that legislation is put in place to ensure workers laid off in the future due to liquidations are not treated like the Debenhams workers. We urgently need to reorder the priority of creditors in a liquidation so that workers are at the top of the queue.

We need a fund, which employers should pay in to, that would cover the entitlements of laid off workers where there are no assets to do so. The trade union movement as a whole must now make this a priority. All trade unionists should mark the one year anniversary of the struggle of the Debenhams workers. More importantly trade unionists affiliated to ICTU unions should demand that the ICTU deal with this issue and ensure there is no repeat of Debenhams.