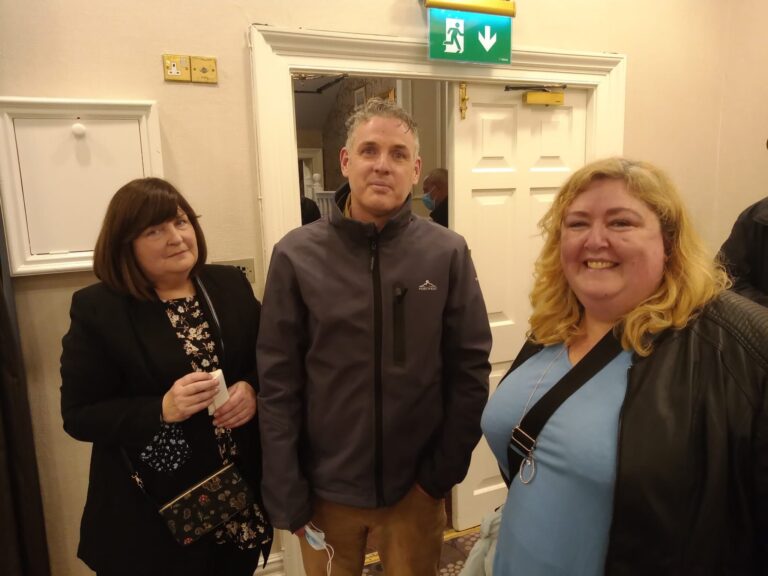 The fight of the Debenhams workers continues. Workers reunited for the first time in months yesterday for the 4th local launch of TALES FROM THE DEBENHAMS PICKET LINE in Dublin’s Buswells Hotel.

Fergus Dowd spoke with Jane Crowe about the book which presents the history of the company, its demise, the personal stories of a mix of strikers who fought on the pickets throughout the first 400+ days of the pandemic.

Authors Sue O’Connell and Fergus Dowd do best highlight the wide range of supporters and solidarity actions that helped sustain the workers as they fought for their union-agreed redundancies- and as they continue their fight to win better rights for workers through the Debenhams Bill.

The workers highlighted the contributions of People Before Profit and Solidarity members and our members were there in good numbers. Some took time off work to be present.

The struggle of the Debenhams workers was a political landmark for many on the left in Ireland and is an example of how workers’ fights demonstrate how our society and economy are structured. The lesson we all learned on the pickets is not that Ireland is not a fair society that applies the law equally to all. It pushes workers down but workers have the power to push back and with enough support from across society together we can win for workers – and more than just reforms.

Bríd Smith noted that these lessons were not lost on the working class. They watched from their windows. They saw heavily armed gardaí rolling in late at night to dragged workers and supporters away. The images from this fight will remain. We will remember the nights of when the state showed which side they were on and forcibly broke the pickets.

Bríd noted this heroic struggle was waged and led by women. She singled out Jane Crowe’s mother for praise, ‘You reared her well!’ and drew a comparison with Bríd’s own sister who helped raise her. The laughs that were had on the picket line (and at this event!), the struggles, the stories: all of this is what makes the story of the Debenhams fight essential.

These must be passed on to everyone on the left to deepen and strengthen our understanding and also to grow the left in Ireland. This book is a good start. A play is now in development. A great hope for everyone involved is that the Debenhams Bill could still be passed.

Most importantly each of these workers became bona fide working class fighters on the pickets. They put each other, as people, before profit. We were proud to have joined them and we’ll do it again. Keep telling their story until they win.