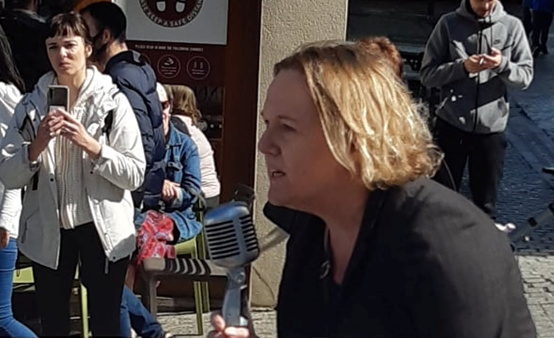 Debenhams workers and their supporters were applauded by people on the streets, as they marched through Waterford on Saturday.  The march was part of a nationwide demonstration to mark their 150 days on strike for a just and equitable redundancy deal.

Setting out from the Debenhams Store in City Square, onto the Quay and into John Roberts Square, the marchers were greeted by applause and cheers from shoppers and well-wishers as they passed by.  Mandate Shop Steward, Michelle Grant, told the large crowd that the company had made an insulting offer to the Union, and that the Shop Stewards in the 11 Stores in Ireland had urged rejection.  The offer, of approximately €1 million, should not even go to ballot.  It would have paid workers a few hundred euros each.

Úna Dunphy of People before Profit was invited by the workers to speak and, of behalf of the activists, the PBP members, the Trade Unionists and the public, congratulated the workers, assured them of continuing support and called on everyone to recognise that the plight of the Debenhams workers might face others in the near future, and their victory in this struggle for justice would be a victory for all.  She said she was astonished at the silence and lack of support from the public representatives in Waterford, and called on the Oireachtas members and local Councillors to join the campaign for justice for Waterford workers.

Following the devastating job losses with the closure of Cleary’s in Dublin, the State was advised, in the Duffy Cahill Report, to make provision for the priority of workers’ needs in any future business closures.  Despite the Taoiseach saying that the Debenhams workers were badly treated, the Government has failed to legislate for the protection of workers facing redundancy in these circumstances.

The Debenhams management in Britain has boasted of its healthy profits and the strength of the Company.  It claims that it had no option but to close its Irish operation because of loss of business during the pandemic, and that it can’t and won’t pay the agreed redundancy money.  The striking workers are preventing the stripping of stocks worth €25 million from the stores in Ireland.  This stock should be sold and the money given to the workers.

PBP will continue, in the Dáil, and on the street to stand up for the Debenham workers and for all who face abuse and maltreatment by arrogant managements.