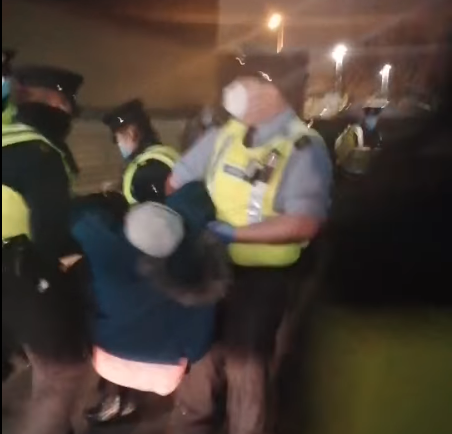 Despite ‘Level 5 restrictions’ KPMG liquidator teams planned, coordinated and paid for these covert actions with Gardaí to take place at the Blanchardstown Centre. Together corporate money and state powers broke the Debenhams picket there removing four trucks full of stock. No arrests were made. They simply picked up picketers’ bodies and moved them aside.

This calculated intervention by the state in a civil workplace matter shows the government’s one-sided identification with corporate interests and the result is a strong but conflicted desire to move the matter on before the one-year anniversary of the picket on Friday 9 April.

So just days after the government announced a continuation of Level 5 restrictions, KPMG sanctioned work to continue as if it was ‘essential work’ in Galway.

Is picket breaking ‘essential work’? Haven’t Debenhams workers been abused enough? Why on earth are the HSA not calling the Gardaí to stop the non-essential work stock removal instead of KPMG calling them in to facilitate it?

Picketers are doing their best to keep numbers low because of the Covid restrictions. KPMG took advantage of that – we can only assume knowing that a Fianna Fáil-Fine Gael-Green government would send the Gardaí to support the side of the dispute with more power and money – as they did.’

The comparison to the Beacon scandal is obvious- where were the Gardaí there? Will the government only ever intervene to work on behalf of the privileged CEOs, landlords, and corporate interests?

The careless attack on women workers not out of character: SNAs, teachers, nurses, students… The same special disregard for women is everywhere in their actions.

In Cork the Gardaí were serving at the behest of the corporate interests of KPMG against working women again as the KPMG declared they had chosen a time to empty the women’s private workplace lockers. They asserted that the workers would not need to be afforded the dignity to move their own possessions out. These lockers stood locked inside for nearly a year as the conflict simmered on the pickets outside. And not to worry, they condescended to reassure the women, the Gardaí would oversee the removals.

The natural contempt and sly tricks and bias government show against the Debenhams workers is so obviously against the public will that operations like the April Fools Blanchardstown Picket Break have to be done at night.

The public hugely support the workers.

Everyone in Irish society clearly see that the Debenhams Workers are a living example of working class power, of women’s power, of people power and just guts. We need to contact anyone who has worked in Debenhams to let them know that and tell them we will support them as they continue to defend their picket line.

Debenhams workers are a symbol of the resistance we all have shown to the death by a thousand cuts this government has decreed for working class people in Ireland. Their picket is a line in the sand. Government and the business class crossed that line this week in Blanchardstown and they did in Galway as well. And they did it with a smile on their faces.

Picketers are fuming. Working people and families can see the total absence of support workers get from Fianna Fáil-Fine Gael-Green government.

People Before Profit supports strong organised working people standing up for themselves together. We are supporting them in every way we can and opposing the rotten government and business interests working to silence them. The contempt shown for Debenhams workers while Beacon CEOs and KPMG campaigns get special protections from the state has done more for class consciousness than anything since the Right2Water campaign. We salute the Debenhams picketers and we stand with them.

On 24 March People Before Profit hosted their second workers’ forum. The topic was ‘Winning Workers – Taking On Precarity’. Jane Hardy former professor of

No Vaccine For The Financial Strain Of Covid

When the government took the opportunity last month to take credit for Ireland having the only economy in the EU to grow in 2020, they