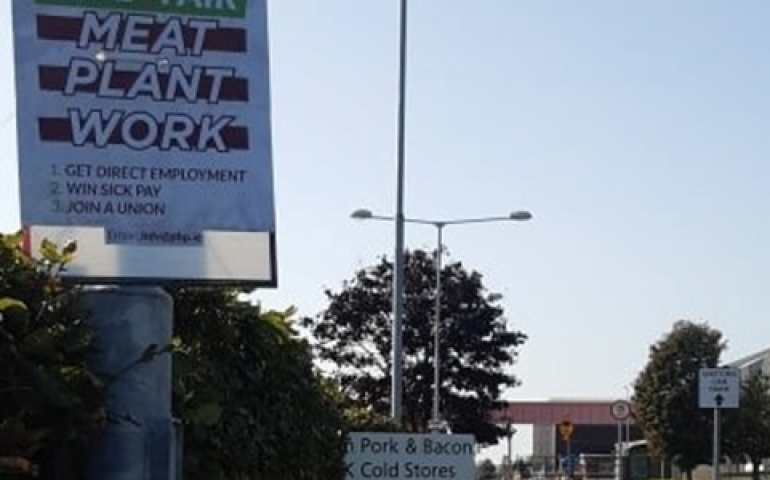 “Dawn Meats”, says Úna Dunphy of People Before Profit, “has put the population of Waterford at risk.  Overcrowded busses have been taking workers to a Waterford Dawn Meats Plant which has had a Covid-19 viral outbreak and is continuing to do business as usual.

Work practices which failed to protect their own workers have led to outbreaks, causing a spike in the region, which up to now had been exemplary in the reduction and control of Covid-19.  The withholding of vital information regarding a public health issue in a pandemic is shocking, and there must be clarification regarding who took that decision.  While the production of food is an essential service, that is important to maintain, any processing plants that deal inappropriately with the risk of Covid-19, should not be permitted to continue operating.  They pose a substantial risk to their employees and the regional population.  We have seen many businesses comply to the letter, but have to close in the interest of public safety.  Those that flout the rules and laws surrounding Covid-19 must be dealt with appropriately”.

Minister for Health, Stephen Donnelly has confirmed that before the recent surge of Covid-19 cases, nearly half of the workplace clusters in Ireland had been in meat processing plants, and that this is the experience around the world.  While this was known, why then were meat plants treated with such light touch inspection and control?

Ms Dunphy has called on the Government to answer the following questions concerning practices at the Dawn Meats Plant at Granagh and elsewhere:

The Acting Chief Medical Officer has appealed to everyone in Waterford to do all they can to stop the spread of Covid-19.  Dr Ronan Glynn stated that 103 cases have been diagnosed in Waterford over the last fortnight, and that the numbers of cases are “already high and continuing to rise fast”.  People Before Profit supports a continuing vigorous response, but must insist that all businesses and individuals play their part without exception.  Would the workers at Dawn Meats (or the public), agree with all the measures that the company claim to have taken?

“The complacent and dismissive response of local TDs and Public representatives is shocking”, according to Úna Dunphy “Rather than casting doubt on the test results for infections in Meat Plants, as Deputy Matt Shanahan did in the Dáil as late as 26 August, when he suggested many were false positives, Representatives should be insisting on a robust response to outbreaks, and closure, proper sick pay, and through-going inspection to protect vulnerable workers, their families and the public”

People Before Profit welcomes the statement from the Irish Congress of Trade Unions that the Covid-19 pandemic has exposed failings in how the country protects workers against loss of income, and supports its call for the Government to introduce mandatory sick pay for all workers.  Ireland is completely out of line with European norms in not requiring employers to continue to pay a worker’s wage if sick and unable to work for a period of time.  Sick pay in Ireland is at the discretion of the employer to include in a contract of employment. This means that workers face being financially compelled to keep on working when sick.  Workers should be entitled to a guaranteed period of paid sick leave of no less than two weeks and paid at 100% the worker’s wage.