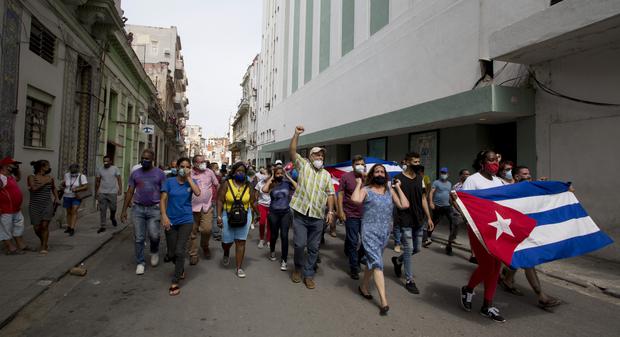 Thousands of people have joined simultaneous demonstrations across Cuba to protest at the shortages of Covid-19 vaccines, economic deprivations and restrictions of civil liberties.  Store shelves are bare and many pharmacies cannot supply basic products. In the province of  Matanzas the Covid infection rate has risen to 1,300 people per 100,000 inhabitants over the last 15 days and is overwhelming the health system. Others, fearful of the possibility of US intervention, have mobilised under the banner of ‘defence of the revolution’.

There are a number of underlying causes for the protests. The ongoing blockade by US imperialism of Cuba has had devastating impacts for the Cuban people for decades. Its purpose is to punish the Cuban people for revolting against the Batista dictatorship and their ongoing resistance against imperialism and neo-colonialism. It is also targeted at extinguishing any alternative on the Latin American continent, which is faced with neoliberal brutality, and ongoing US backed coups and interventions to safeguard capitalist and imperialist dominance.  Trump intensified the blockade by making it impossible to send remittances, leading to a loss of $3.5 billion annually – a direct blow to more than half of Cuban families.

In the context of that stranglehold on the Cuban economy and society,  the economic policies pursued by the government have failed. The country has relied increasingly on tourism which has been devastated by Covid-19. The collapse of oil production in Venezuela has cut off a  source of cheap oil.  US pressure has led other Latin American governments to cancel medical contracts with Havana and send Cuban doctors home. All of this led to huge problems in a country which relies on foreign exchange to import 70% of its food, 69% of its oil and many pharmaceutical products. The Cuban government’s response has been to engage in more market orientated reforms. The dual currency system ended in June and an exchange rate was set as $24 pesos to the $1. This has led to an erosion of income and growing inequality.

It is gross hypocrisy for US imperialism which has the greatest responsibility for these crises to now attempt to use them to prepare a so-called ‘humanitarian intervention’. This intervention would have the aim of returning Cuba to its previous role of a subordinate colony.

While opposing any intervention of US imperialism, we support the right of Cuban people to protest against their government. We are opposed to repression of protests, the cutting off of access to social media sites and the arrest of genuine protesters, like the ‘critical communists’ including Frank García Hernández. These measures of repression as well as increasing privatisation undermine the gains made by the Cuban revolution and make it easier for US-backed counter-revolutionary forces to co-opt and manipulate the growing frustration boiling up from below. The best safeguard against any attempts at imperialist coups or counter-revolution is the empowerment of the Cuban masses and the implementation of comprehensive democratic and socialist reforms.

People Before Profit calls for an immediate end to the blockade of Cuba and condemns any attempt to intervene in Cuba by the US and its allies.

We call for an end to US interventions in Latin America, especially in Cuba and Venezuela and an end to the current discussions about intervention in Haiti.

We oppose the EU’s foreign policy toward Latin America, which involves supporting the same right-wing forces that were backed by Donald Trump and are still supported by the new US administration under Biden.

We call on the Cuban government to respect the rights of genuine protesters and to cease a policy of repression.

We send our solidarity to those within Cuba who favour a real socialist system based on real democracy as the best way to defend the interests of Cuban people.

No Housing For All – Just Profit For The Few

Sharon Graham’s progressive vision and victory is an important signal for radical change for Unite the Union. Lessons are that a strong left platform can win and that workers know they need to fight to win.

Every year there is a repeat of the debate on the benefits of the Local Property Tax (LPT). Proponents laud its importance for funding local

Workers who fight are workers who care. This summer People Before Profit have seen three great examples and we sent support to each. 1. WOODBURN