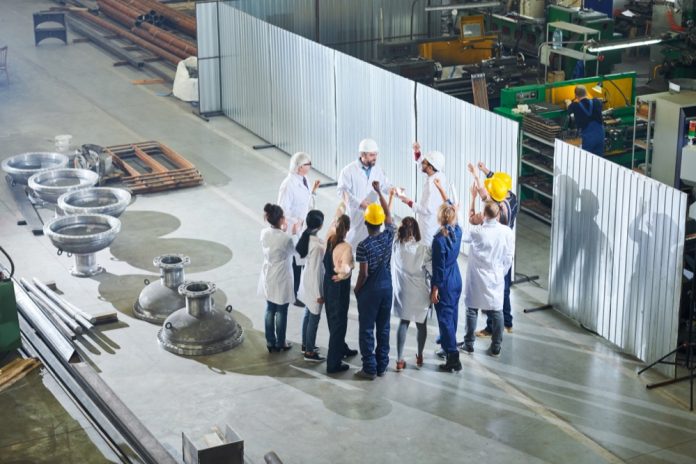 The Government have published a “Return to Work Protocol” that is supposedly aimed at allowing for a safe return to work. On Monday May 18th, the first tranche of workers in construction will be expected to return, with this protocol supposedly governing how they return to workplaces. The head of the CIF (the bosses union in construction) Tom Parlon has already said his industry will be the “guinea pig” for a wider return. In reality, it will be construction workers who are the guinea pigs , not Parlon or the other CEOs and developers.

The guideline offers little actual protection for workers and has a heavy emphasis on personal responsibility. The Minister responsible for the HSA (the state agency that is meant to enforce workplace safety) has admitted that from over 200 complaints from workers to date about unsafe work practice around Covid-19, the agency has not responded with a single inspection or attempt to close a workplace down. There is little in the document that suggests this will change soon and the agency has yet to receive any more staff or resources to conduct workplace inspections.

The main point in the protocol is that workers have to sign a form saying they have no symptoms nor have they been in contact with any confirmed case of Covid 19.

Why the signing of this form plays a prominent role in the protocol is hard to understand, as it has no impact on the actual safety in workplaces and seems designed only to be a substitute for real testing  and to absolve employers of any responsibility for the possible spread of Covid 19 in workplaces .

While some headlines have emphasised that the HSA can now close down unsafe workplaces, this is not new and laws currently exist to do that; the problem is the state has always been reluctant to enforce any regulation on employers that might cost them money or profits.

The outrageous treatment of workers in meat processing plants is one graphic example of how little protection has been available for workers during this pandemic. There are over 600 confirmed cases in meat processing workplaces and over 19 clusters. Reports from workers shows how employers will put profits before worker health even in the middle of a pandemic. A Guardian report quoted some workers in Irelands meat factories saying

“I got it in the factory, if the disease was in the animals, they’d have closed the place. But for workers, the factories can do what they want.”

“I felt frightened, the damage has been done.”

in the factory.. not enough information was given to non-English speakers about how they could keep themselves – and those around them – safe from infection.

But in the factory, workers earns about €11.80 (£10.40) an hour, life is hard. Workers feel intimidated and vulnerable, and are unable to stand up for their legal rights.People are not being treated with dignity and respect.”

The factory didn’t put anything in place to protect its workers. “There was no checking of temperature, no masks, no 2-metre social distancing. When we asked for masks, they said no..New workers are brought in to replace people who are out sick, but we don’t know if they’ve been screened.”

The truth about Fine Gaels Protocol is that it has been written by IBEC and the CIF and disgracefully rubber stamped by the ICTU, but it will do little to stop abuses such as those in meat processing.

Workers will need to reply on their own strength and organization to safeguard their health in any return to work. This means they should elect the workers representative that the protocol calls for and not allow management to appoint someone. Nor should workers wait for the HSE to sanction workplace closures where they are operating unsafely. While the HSE can in theory serve employers with Improvement and Prohibition notices, this agency has shown no willingness to date to confront flagrant breeches of workers health and safety guidelines. Specifically, workers should know that the protocol does place certain obligations on employers:for example to provide proper deep cleaning and disinfection of areas and surfaces in workplaces at least twice daily and that PPE and hand sanitizer and washing facilities should be available. If workers cannot be 2 meters apart, the employer should install physical barriers and plastic sneeze guards.

The willingness of ICTU and some other union officials to endorse such a week protocol is a warning  of the overall weakness of many union officials on the pandemic and a possible return to work. Workers will have to insist that unions take a firmer stand in defending workers interests as this pandemic unfolds.