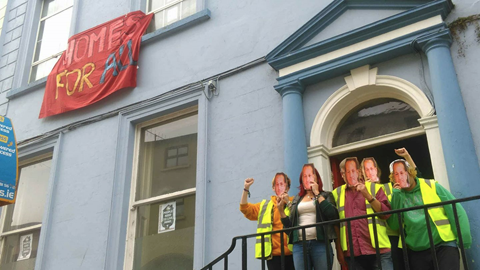 In September 2018 a group of Waterford activists occupied the Presbytery, in a 24 hour action to highlight vacancy/dereliction in our midst, alongside a rising and intolerable housing crisis.  These were two Merchant Buildings rented by the Council for 75 years, unused and rotting in places inside.  The interior architecture and fixtures were remarkable and should form part of the cities cherished heritage.

Three years on and still the #HousingCrisis rages.  Vacancy/Dereliction are one of the most annoying aspects.  There is a growing national outrage which is manifesting mostly on social media, but shaping up into a growing campaign, along with the National Housing Campaigns.

Councils have tools to deal with this, but there appears to be a lack of collaboration between departments.  Interpretations of how to use the Vacancy/Dereliction registers fail to capture the true scope of the problem.  Using these registers just for Planning, in place of collaborating with Housing/Cuture/Community, misses the essence of the legislative powers.

People Before Profit representative Una Dunphy says “We’ve stuck with Vacancy/Dereliction as an important issue for Housing, but also for Heritage and Community spaces.  The emphasis on rights of private property can’t be allowed to trump social justice and the common good.  This balance needs to be urgently addressed and implemented regarding Vacancy/Dereliction.  A lick of paint on an abandoned building is not acceptable, when thousands are in need of homes.  We absolutely need to follow in the footsteps of countries with proven track records on this.”

As well as repurposing vacant buildings, we need to look at our urban centres to re-evaluate what they must become to meet the needs of populations now, or risk them becoming abandoned spaces with little relevance to the citizens they were built to serve.  Less shops and more civil amenities are the dominant trends in both a post Covid and climate emergency age.

Una continues: “There are a variety of opinions on the vacancy issue.  The pure wastefulness, the amount of people in need of housing, the heritage rotting before our eyes, but environmental factors are considerable.  Tearing down a building to build another is not at all environmentally friendly or cost effective most of the time.  Councils really need to be allowed to use Meanwhile Usage or Compulsory Lease orders, which do not take an age to deliver nor do they need to challenge ownership, but they can deliver on repurposing in a swift timeframe, get people housed, get buildings in use again.  The Buy and Renew scheme should also be used more to add to Council housing stock.  While Waterford Council is ahead of the posse on Repair and Lease, owners can take back the properties, resulting in tenants having to relocate.”

We need to broaden the scope of housing by incorporating the built environment, we also need to react promptly to new needs, so that our urban spaces are vibrant and relevant to citizens that inhabit them. It is always important to consider that “The greenest building is the one that has already been built.”

Speaking following a meeting of the Health Committee today, PBP MLA Gerry Carroll said he was ‘disappointed’ that the committee did not vote on his

Points Race Should Be Abolished

People Before Profit TD Paul Murphy has written to the Information Commissioner (see notes), Peter Tyndall, asking him to investigate whether Minister for Foreign Affairs