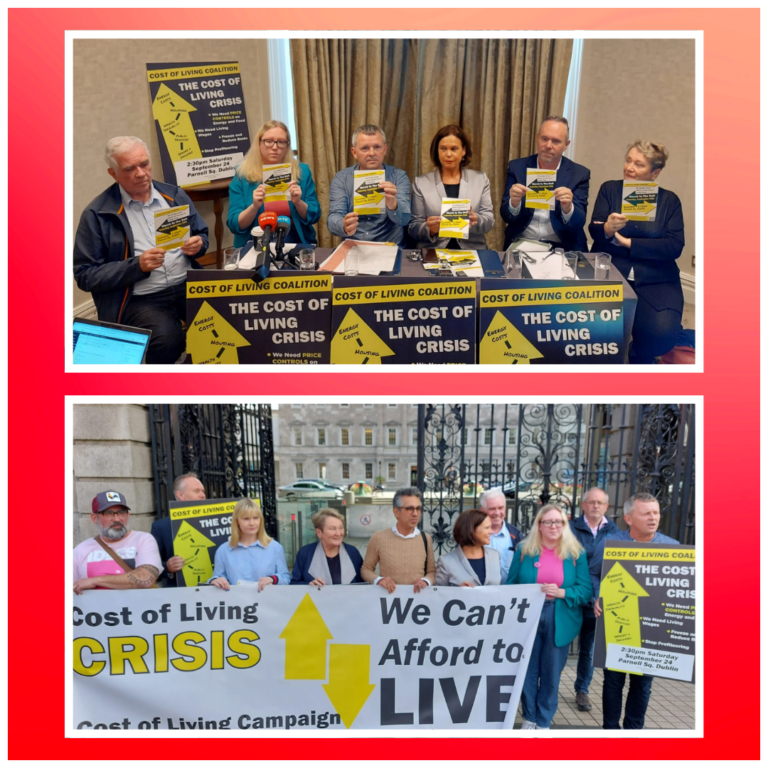 March to Assemble at Parnell Square at 2.30 on the 24th

People Before Profit Contingent meeting at 2.15pm at the Garden of Remembrance Gates

The Cost of Living Coalition, a coalition of over 30 organisations, today called on the public to turn out in huge numbers on September 24th to send a clear message to the government that radical action is needed on the cost of living and housing crisis.

The Coalition is holding a major pre-budget protest on September 24th, assembling at 2.30pm at Parnell Sq. The Coalition says we need a movement like the Water Charges Campaign to put real pressure on the government.

Richard Boyd Barrett TD of People Before Profit and Convenor of the COLC said:

“70 per cent of people say they struggling to make ends meet. The same number do not believe the government is doing all it can to improve the situation. They want radical action to protect their standard of living. We need price and rent controls, an end to profiteering and to nationalise the energy system to meet people’s needs. We need huge numbers on the street to send a clear message to the government that radical measures are necessary to deal with the cost of living and housing crisis”.

“It is a government’s primary responsibility to ensure that the basic rights and needs of its citizens are met. While the current crisis is not of the government’s making, it has the responsibility to ensure that people do not go hungry or are unable to heat their home or switch on the lights. Successive governments have failed over the past two decades to meet the housing needs of its citizens, it should not continue to fail them in this new crisis.”

“People are struggling to stay afloat due to the most serious cost of living crisis in decades. Bills are soaring across rent, childcare, energy bills and groceries- to name just a few. Households’ finances are pushed the brink and people need a break from these price hikes urgently.

“Despite this crisis, there has been no serious response from this government. Instead of decisive action to deliver for people, they have dithered and taken half measures that haven’t made a dent in the nightmare faced by people.

“This month’s budget must mark a change in direction. It’s time for change. The government must deliver a cost of living budget that ensures workers and families get the break that they need.”

“The Irish Senior Citizens Parliament are calling for direct targeted action to those most in need in the upcoming budget. We need this budget to reflect the Government’s understanding of how harsh the coming winter months will be and ensure that there will not be ‘token gestures’ when it comes to supports and increases. While ‘one off’ payments will help they are far from the only measure needed.

We ask that all older people come and join us on the 24th  September and remind this Government in no uncertain terms that older people are no longer able to survive on the current pension and expect this to be dealt with.”

Macdara Doyle of the Irish Congress of Trade Unions said:

“We need to see urgent and radical action from government to prevent an energy crisis morphing into a jobs crisis and a wider economic crisis. The priority now must be the protection of jobs and living standards, given the huge pressures already on workers, as they struggle with sustained cost increases on all fronts and soaring inflation. In that context, measures such as an increase of 80 cent in the Minimum Wage will simply not cut it.”

The Cost of Living Coalition is supported by

The Cost of Living Coalition has agreed to campaign for the following demands: