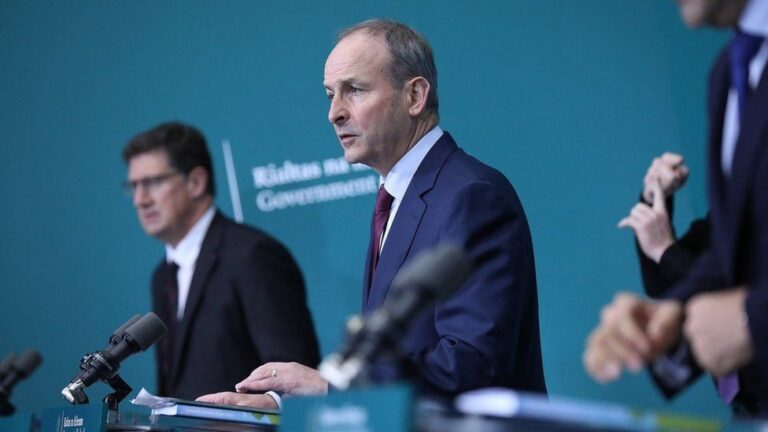 The government has unveiled its climate action plan to halve Ireland’s emissions by 2030. It is full of aspirations and contains a distinct class bias. There is little chance of success. Here is why:

1. Transport: Despite its small size., Ireland is one of the most car-dependent societies in the world. Public transport is minimal in many rural areas. In Dublin, public transport is costly and overcrowded. In a German city, you can buy one a €2 ticket that will allow you to take any public transport within a two-hour interval. But if you travel by Luas and then by bus you can pay over €6 for a single journey.

Instead of a massive increase in public transport and a move to make it free, the Government is promising to put one million electric vehicles on the road by 2030.

Richard Bruton made the same announcement back in 2019 – and they have just re-packaged it.

To exacerbate the issue, whilst they push us all to electric vehicle ownership, the government is at the same time warning of power cuts across the country due to issues in the electricity supply chain.

An electric vehicle costs over €25,000 and the number of people who can afford that is quite small. In addition, the production capacity to make that amount of vehicles is not currently available. No wonder even Eamon Ryan admits the target will be difficult to achieve.

2. Energy: Ireland is over-reliant on fossil fuels to produce its energy and the government is proposing a shift to 80% renewables.

Yet even while making these promises it is extending the life of fossil fuel generating plants. The coal-burning station at Moneypoint and the oil burning station at Tarbert were due for decommissioning, but their life is being extended. The main reason is that data centres are consuming so much of our energy.

There is nothing in the government plans to halt the spread of data centres which are scheduled to consume 30% of energy by 2030.

The government’s strategy for renewables is to hand over swathes of our oceans to private firms. It is introducing a Marine Area Planning Bill to prevent planning objections. However private for-profit companies use near-shore wind farms rather than build further offshore farms. Socialists want public not for profit wind farms that serve local needs.

3. Retrofitting: Irish houses have a  very poor energy rating and so a massive programme of insulation is required. But the government plan is only to make low-interest loans available.

Yet a housing retrofit will often cost over  €30,000 and loans must be re-paid. Working-class people do not have such ready money  – nor the financial resources to guarantee re-payment

If there was a state-owned company, retrofitting could be done on a big scale, with a huge reduction in cots.

4. Agriculture: This is the biggest joke of all. Agriculture accounts for one-third of emissions, mainly because successive governments have pushed a massive expansion of the beef and dairy herds.

Farm incomes are now dependent on the vagaries of global markets. Yet there is no talk of reducing the herd. There is no mention of how the main burden of a transition could be placed on the big farmers and the likes of Larry Goodman, currently one of the main beneficiaries of CAP grants.

Instead, methane reduction is supposed to come from a reduction in the nitrogen content of fertilisers. It is a total COP out.

The Irish Anti War Movement, along with several other anti-war and social justice groups in Ireland, has written an open letter to Irish Foreign Minister

The latest report from a United Nations agency shows that the world is on track for a temperature rise this century of at least 2.7

As world leaders prepare to meet at the United Nations Climate Change Conference, also known as COP26, Climate Activists across Ireland are beginning to mobilise

Squid Game has been a runaway hit on Netflix. The setting is a horrible Hunger Games-like television show in a class-divided near-future capitalist South Korea. Impoverished