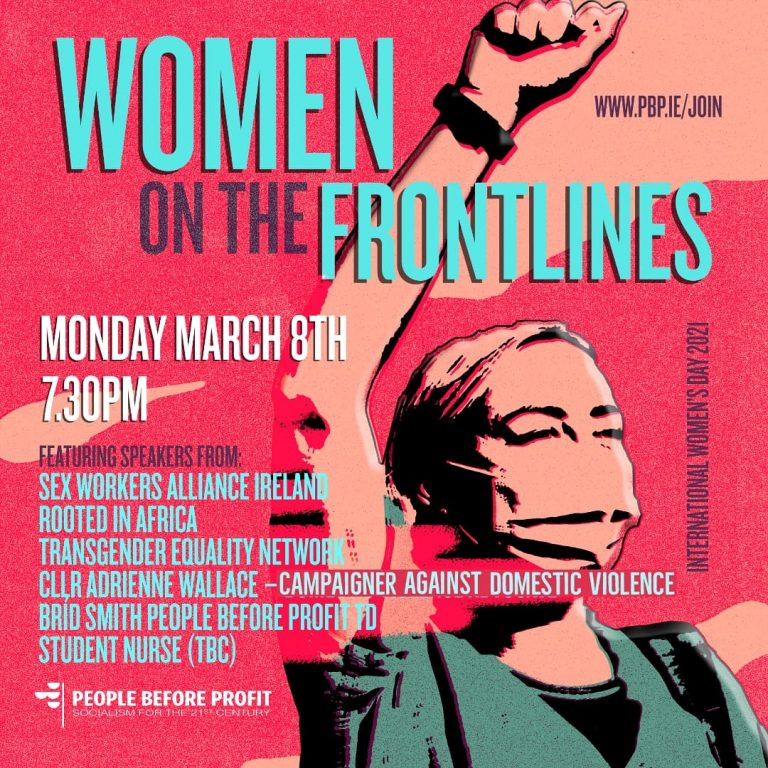 On March 8th this year, we are asking People Before Profit members and supporters to give their backing to two events.

International Women’s Day is on March 8th and is an important occasion for promoting women’s rights.

Its origins go back to a decision of the International Socialist Women’s Conference in 1910 to nominate that date as a day on international protest to win equal rights for women. Crucially, these activists wanted both the vote and equal pay.

In 1917, the protests on International Women’s Day sparked off a revolution that overthrew the Tsar.

Today corporations and employer’s organisations try to appropriate the day. They present their Human Resources department as the key agency that shows ‘concern’ for their employees. They even talk about ‘equality, inclusion and diversity’. But while there are more female faces among the top managers, working women still get a raw deal.

Women are still paid, on average, 14% less than men.

Irish childcare costs are horrific. A family with two children will payout 40% of their income on childcare compared to 12% for OCED countries.

Irish employers are not obliged to pay maternity leave that is equivalent to the actual income that a woman earned. Instead, many women in the private sector must rely on a state payment.

The global MeToo movement has highlighted the enormous impact of sexual harassment on women’s lives. Powerful men have been able to get away with a pattern of terrifying women into silence because they controlled their careers.

Bullying and sexual harassment are rife throughout Irish workplaces.

One reason has been the weakening of the trade union movement, caused by three decades of social partnership. If there were strong unions in the workplace that were fully conscious of the problems of sexism, more women would speak out.

Women who were survivors of the Mother and Baby homes have been treated disgracefully. They have not been given full access to their records and religious orders such as the Bon Secours, who ran the Tuam Babies home, have gone on to run a major network of private hospitals.

Despite Repeal, women have not won full rights to bodily autonomy, North or South.

During the Trump Presidency, there was an attempt to re-assert traditional sexist images of women and to attack trans and non-binary people. This persists in an Irish far right that has been happy to cover up for the abuses of the Catholic Church.