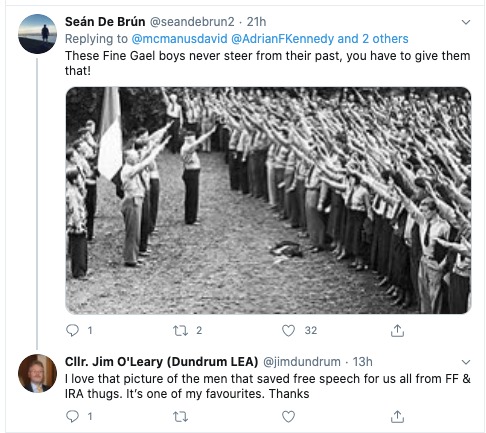 People Before Profit cllr Adrienne Wallace has called for a public apology from Fine Gael after one of their councillors in Dundrum tweeted support for fascism.

FG Cllr Jim O’Leary was responding to a social media user who was commenting on Mr O’Leary’s fellow party councillor’s calls for Black Lives Matter protesters to lose their €350 Covid-19 payments. The social media user posted a picture of the Blueshirts, the organisation founded in the 1930s which later became Fine Gael, performing a Nazi-style salute. In response, Mr O’Leary tweeted: “I love that picture of the men that saved free speech for us all… It’s one of my favourites.”Asked to clarify his remarks by Independent.ie, the councillor responded by defending them saying “My admiration is for those that secured free speech in Ireland…”

Cllr Adrienne Wallace has called on Carlow’s Fine Gael councillors to publicly condemn their colleague’s comments and has demanded a public apology from the party. She said “Fascism and racism are not threats that have gone away, only two weeks ago George Floyd was murdered by police in the States. This was followed by thousands of mostly young, black and Irish people attending Black Lives Matter rallies. People are publicly challenging racism and fascism with many speaking out about the racism they endure so for a Fine Gael councillor to publicly support this murderous regime is beyond belief. It is a kick in the face to all the brave young people fighting for change but much more worryingly it is an incitement to hatred.”

Cllr Wallace added “It seems Fine Gael are still harbouring some of their old Blueshirt tendencies but this doesn’t come as a surprise to many considering they stand over the racist Direct Provision centres. These centres are glorified prisons for people fleeing war and persecution and have been designed to make big profits. One of the State’s largest providers of direct provision accommodation to asylum seekers recorded a pretax profit of €2.36 million in 2018. People Before Profit and all progressive voices completely condemn this system. We are calling for it to be abolished and replaced with a humane system.”