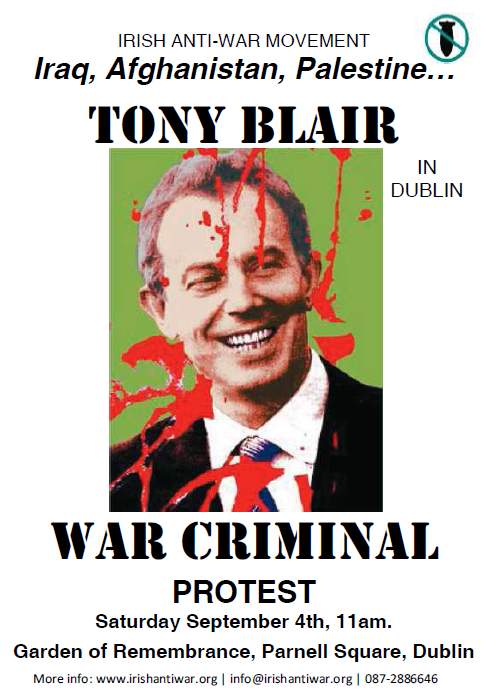 -ANTI-WAR MOVEMENT TO OPEN BOOK OF CONDOLENCES THIS WEEKEND FOR VICTIMS OF BLAIR’S WARS.

The Irish Anti-War Movement (IAWM) has announced it will open a book of condolences this weekend in Dublin for the victims of Tony Blair’s military actions and foreign policies in Iraq, Afghanistan and Palestine.

The book of condolences will be gathered in Dublin’s city centre in the coming week as part of the preparations for a major demonstration on Saturday September 4th during Mr Blair’s visit to Dublin to launch his memoirs.

The book of condolences will be located near Eason’s, as this is where Mr Blair is due to hold the book-signing event on the morning of September 4th.

The demonstration on that day will assemble at 11.00am at the Garden of Remembrance, Parnell Square, before marching to Eason’s where Tony Blair’s book signing event will be taking place.

The protest will focus on Tony Blair’s key role in launching the wars in Afghanistan and Iraq that have claimed hundreds of thousands of lives and devastated both countries.

It will also focus on Blair’s complicity – both as Prime Minister and now as EU envoy to the Middle East – with the war crimes and human rights abuses committed by Israel against the Palestinians.

The protest will also highlight the continued complicity of the Irish government with the wars launched by former US president George Bush and Mr Blair – in allowing US troops to use Shannon airport and through the direct involvement of a small number of Irish troops in the Afghan conflict.

The IAWM has begun a major national mobilisation for the demonstration – producing thousands of leaflets and posters for distribution across the country.

Other groups such as the Peace & Neutrality Alliance and Ireland-Palestine Solidarity Campaign have already pledged their support for the demonstration. Protest organisers are contacting the widest possible range of political and civil society groups to support the protest.

"Tony Blair is a war criminal, if the term has any meaning at all. He played a key role in fabricating the lies and bogus justifications for an illegal and murderous war in Iraq and the equally immoral war in Afghanistan. He has the blood of hundreds of thousands on his hands.

Credible estimates put the numbers of dead in Iraq as a result of the war launched by Blair and Bush at over a million. Millions more have been made refugees and the infrastructure of Iraqi society has been utterly devastated.

In Afghanistan, tens of thousands have died and the body count continues to rise daily as result of the war and occupation launched by Bush and Blair, and now continued by Obama and David Cameron. By every objective humanitarian index, life for the Afghan people is worse now than it was before Blair and Bush launched their brutal war.

Blair has also done absolutely nothing to restrain or sanction Israel for its deliberate murder of thousands of Palestinians and systematic denial of their most elementary human and civil rights. As Prime Minister and now as EU envoy, Blair has given moral support to Israel in its criminal siege of Gaza by refusing to recognise the democratically elected representatives of the Palestinian people. The refusal by Britain and other major western powers gave the Israel the green light to besiege and assault Gaza, with terrible human consequences.

The idea of Blair justifying his war crimes in a book, regardless of where that money goes, is nauseating. This book is a purely cynical manoeuvre to whitewash responsibility for war crimes and mass murder.

In 2003 100,000 people came onto the streets in Dublin to oppose Blair and Bush’s war. We hope that many of those will protest once again on September the 4th to express their outrage at the terrible suffering Blair has inflicted.

This protest is not just about the past but about Afghanistan, Iraq and Palestine today, where people continue to die and suffer every day as a result of the policies initiated by Blair and Bush.

This protest therefore will, once again, call on our government end its complicity with US/UK warmongering by ejecting US troops from Shannon, withdrawing Irish troops from Afghanistan and imposing sanctions on Israel for its inhuman treatment of the Palestinians."