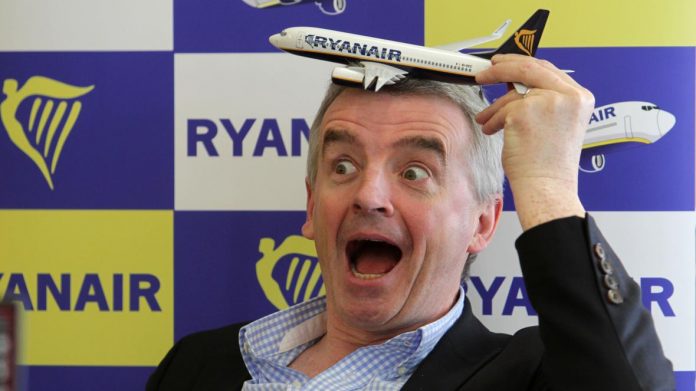 The past week has seen the Irish business class and their mouthpieces ramp up their efforts to convince people that they need to get back to work, whatever the cost to workers’ lives.

Ryanair boss Michael O’Leary was given plenty of airtime yesterday to explain how Ryanair will seek to operate full flights from July and how people don’t need to quarantine for 14 days if they travel.

The Irish Times ran a piece by economist Andrew Oswald explaining that young people should be brought back to work because they are less at risk. He declined to mention that about 50% of 18-34 year olds in Ireland still live with their parents because of unaffordable rents, and that they will risk infecting their own families if they become ill.

And Ian O’Doherty – claimed by some to be a journalist – was in the Irish Independent yesterday saying that the continuation of the lockdown is “economic genocide”.

Since the beginning of the crisis, the establishment have urged us to “listen to the experts”. The extent to which they have followed their own advice can be debated, but at least there was an admission that we should be following public health advice.

Yet now, the pretext is being abandoned in favour of the profiteers and their ideological cover, who are happy to put the lives of workers and their loved ones at risk.

For those who are interested in what disease experts are saying, top epidemiologist Gerry Killeen has proposed that Ireland should now follow the lead of New Zealand and “crush the curve”, rather than flattening it.

Killeen said:
“Flattening the curve won’t drastically reduce the number of deaths… It simply spreads them out over time – potentially indefinitely. […] You would have to decide an acceptable number of deaths, and once you decide to relax restrictions, you will see those numbers climb again.”

According to Killeen, two more strict months of lockdown would be required to bring the total number of daily deaths to zero by mid-July. If this succeeded, society and the economy could then reopen in September with very few restrictions. We would also be in a solid position to avoid a disastrous second wave of the disease.

Of course, the major caveat is that the same strategy would have to be deployed both North and South, as not doing so would risk the disease spreading once more across the entire island of Ireland. The rate of transmission at present is lower in the South than in the North, but both jurisdictions are below R1 – meaning the number of cases will reduce over time if this is maintained.

Crushing the disease would be achievable, therefore, if Fine Gael were willing to put the profits of business on hold for another few months, if the Northern Executive were willing to break from Tory policy, and if both governments worked together to protect people from the disease and to support workers with the benefit payments and bill amnesties they require to make it through this crisis.

Professor Killeen asks:
“If we are close to zero daily deaths, then why on earth lift the restrictions? To get down to a level of deaths that might be acceptable, you’re pretty close to endgame anyway, so why wouldn’t you finish the job?”

Michael O’Leary might be a good person to answer this question – the answer might have something to do with his profits.