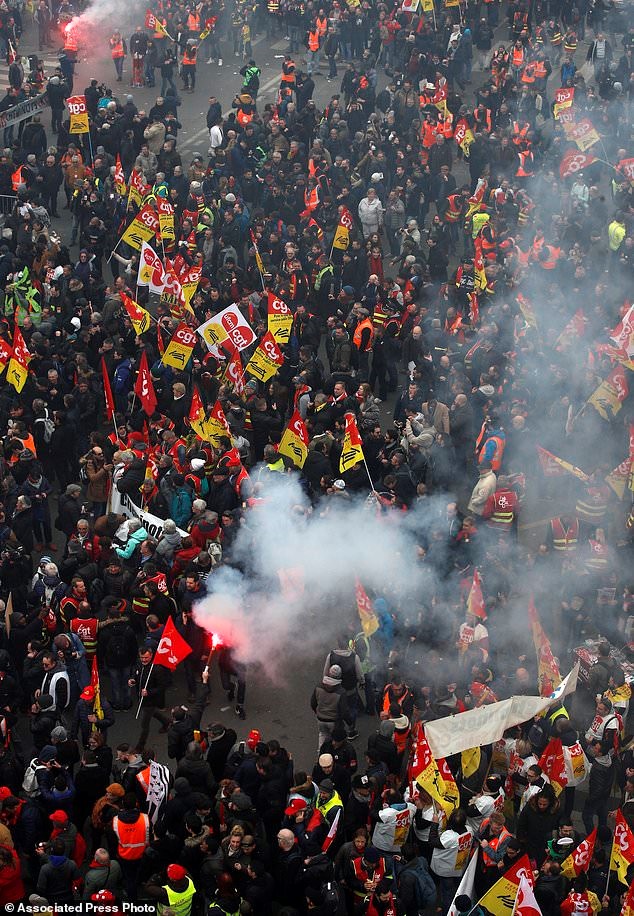 French workers and students are marking the fiftieth anniversary of the great revolt of ’68 in the best possible way – by continuing the struggle.

Universities blockaded and classes replaced by radical political teach-ins, lecturers voting to give top marks to every student in their class (in support of the student movement which has halted classes for several weeks), mass meetings of thousands on campus, riot police evacuating sit-ins in the early morning: the wave of workers’ and students’ revolt against Macron’s neo-liberal policies is still going strong.

The 1st and the 5th May saw dynamic mass demonstrations with the strikers at the head of the demos, and the 26th May is being announced as a « tidal wave » called by unions and left organizations together. After the 1st May, the media was completely focussed for a few days on the fast food antics of the “Black Bloc”, but have now been forced back down to earth since the movement remains solid.

The strikes are hitting home: fourteen days of rail strikes (on a pattern of two days strike, three days working) since the start of April have caused severe financial losses to French business in general. The class-conscious rail strikers are protesting above all against a yellow –pack deal that would mean that new recruits had far inferior contractual conditions to those of existing employees, but also against creeping privatization.

The Prime Minister, Edouard Philippe, who had been trying to stay out of direct involvement, was forced finally to meet with union leaders yesterday (though he offered almost nothing new).

Fourteen days of rolling strikes by airline workers at Air France have cost the bosses 300 million euros. Share prices are falling and when last week the company balloted its workers on a new pay deal, the (miserly) plan was thrown out, and the managing director of the company promptly resigned.

A series of strikes at the supermarket giant, Carrefour, have led to some concessions but no final agreement. Workers’ power is visibly present across the country, as railway strikers occupy motorway toll booths and let cars through free, collecting donations to the strike fund. The strikes remain popular with public opinion, split fifty fifty on supporting or opposing them. An online railway workers strike fund has raised over a million euros – a tremendous symbolic boost.

The student movement continues to mobilize, with many mass meetings and anti-Macron events and a number of universities occupied – either the whole campus or just administrative buildings. In several towns, university presidents, including those at Grenoble, Strasbourg, Montpellier, Nancy, Bordeaux and Toulouse, have called the police in to intervene, resulting in a number of injuries. Others have closed their universities down for a week, to avoid the movement building up.

At Nanterre, birthplace of the May 1968 student movement, a blockade was voted on 7th May in a mass meeting of 700 students. The university has been blockaded for weeks and no exams have taken place, and a section of the Nanterre lecturers has voted to give high « political grades » to all students. Laughably, the president of Nanterre University, who had proudly helped organize a grand commemoration of the 1968 revolt (complete with commissioned street art), sent in the riot police to get the students out!

Elsewhere, other radical tactics are being used: at the Sorbonne, when exams were organized, some students gave in a blank script with ‘student on strike’ written on it. At Nanterre the mass meeting decided this week that if any exam should take place (authorities are looking for alternative buildings, under police guard), it should be preceded by a vote by students present on whether or not to cancel it.

Even among young people leaving university, unemployment is running around 13%, so there is tremendous pressure for students (and high school students) to take their exams rather than mobilize. But there are now national university coordinating assemblies meeting regularly, as well as meetings and teach-ins aiming at bringing together people involved in different struggles. Rail strikers have regularly been speaking to mass meetings of students.

It is still unclear how the present movements will pan out. Worryingly, a number of national trade union leaders are making conciliatory noises.. The three main union groupings involved: FO, CGT and SUD (to list them from the least combative to the most) are still pushing for continuing rail strikes. But the FO leader is suggesting that a one-month freeze on government plans to allow for talks might be enough to stop the strikes. Even Philippe Martinez, leader of the CGT union federation, has been putting the brakes on some aspects of the revolt, refusing to give his backing to the anti-Macron carnival in Paris on the 5th May.

The necessary, and, today, not unrealistic, call for a general strike, will not come from the union leaders. Nevertheless, pressure from below is real: when union leaders were meeting the Prime Minister, there was a rank and file rally called by SUD outside the building, and rail strikers occupied this week the headquarters of Emmanuel Macron’s political party, La République En Marche, as well as demonstrating inside main rail stations, where they were eventually attacked by riot police.

Coming weeks will be crucial. As well as the “tidal wave” on the 26th, involving both unions and all radical Left parties, there are education strikes on the 22nd May, and strikes involving museum workers and others. A huge amount is at stake. Macron wants to smash the rail strike the way Thatcher smashed the Miners in 1984-85 but he is in a much weaker position than Thatcher was, and may well end up regretting having taken on this battle.

With thanks to John Mullen in Paris .