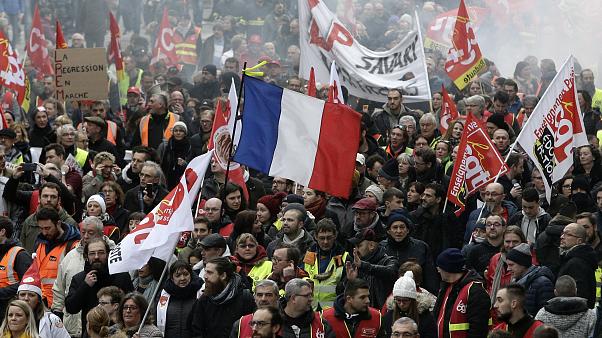 The mainstream media have ignored the real news about 2019 – it was a year of global revolt. Massive numbers have marched on the streets of not only Lebanon, Iraq, and Chile but also Hong Kong, Ecuador, Honduras, Haiti, Egypt, and Algeria. Dictators have been toppled and frightened world leaders are suddenly talking about reform.

The revolts are a cry against inequality and a demand for a decent life. In 2015 Oxfam reported that 62 individuals possessed the same wealth as 3.6 billion, half of the world’s population. Yet the wealthy continually demand more.

So even small attacks can now trigger massive explosions. In Chile, it was an increase in public transport fares; in Lebanon, it was a tax on What’sApp; in other countries it was the withdrawal of food subsidies.

In Ireland, the elite watch these events nervously and try to manage discontent by avoiding flashpoints. They have postponed property tax increases; they have deferred an ‘excessive water charge’; they have started with small carbon taxes and will escalate them gradually over the next ten years.

But look at what is happening in France. For almost a month, workers have been on strike against attempts to raise the pension age. And the reason for the strike? The Macron government want to raise the retirement age from 62 to 64!

In Ireland, we must already work until 66 and next year it will increase again to 67. It will then go to 68 in 2027, making it the oldest in Europe. Each year’s increase is the equivalent of €13,000, which is a bigger robbery than the water charges and property taxes combined.

If that is not reason enough to revolt, consider the following facts:

And all of this because we live under a right wing regime that has created a tax haven paradise for  global corporations.In 2020, we need to get out on the streets in huge numbers – just like we did on the water charges.

On January 11th, there will be the first of a series of demonstration over the housing crisis.  We urge you to get there at 1pm at the Garden of Remembrance, Dublin. https://www.facebook.com/events/475621970005491/

But as well as demonstrating, we need to break the grip that the two right wing parties have over Irish politics. Ever since foundation of this state, nearly 100 years, one of them has being running our country. At various times, they have been propped up by left sounding parties in coalition– such as Labour or the Greens– but they have always run the show. Now even Sinn Fein state that they are willing to join a coalition led by either FF or FG. But if we want to change this country, we need to start really opposing them.

That is why Solidarity-People Before Profit will be the only party standing in next year’s general election whose votes can never be used to support a Fine Gael or Fianna Fail Taoiseach.

In the next few weeks, we shall be looking for your active support on this task.

If you want to make a new year’s resolution and join People Before Profit, you can do so by texting JOIN to 0872839964 or by registering on our website pbp.ie/join