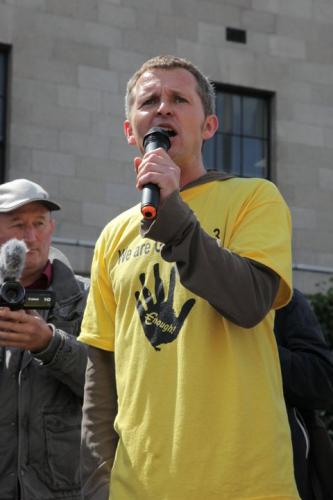 In a statement, Richard Boyd Barrett TD for People Before Profit in Dun Laoghaire has welcomed the success of tenants in St Helen’s Court apartment complex in Dun Laoghaire in fighting off the latest attempt by the “predatory, vulture” landlords of the complex at a “mass eviction of tenants.”

Tenants received word this week that the complex owners had withdrawn from a PRTB hearing on the attempted evictions, just two days before it was due to take place.

Deputy Boyd Barrett has been assisting the tenants in opposing the evictions since they received notices to quit in June.

Deputy Boyd Barrett pointed out that this third attempt at mass eviction of all tenants in recent years by the owners of St Helen’s Court.

Three years ago, the owners attempted dramatic rent increases of over 60% and more recently had attempted a mass eviction on the grounds of “substantial refurbishment.” Both previous eviction attempts received considerable public and media attention.

Deputy Boyd Barrett said that given the repeated attempts by the owners to evict all tenants, it was very likely that a further attempt would be made in the near future, if the current number of 11 tenants, dropped below 10, as this would allow the landlord to exploit a loop-hole in the residential tenancies legislation.

Deputy Boyd Barrett will meet with some of the St Helen’s Court residents today at 2pm at the apartment complex to discuss the latest development in their situation.

Deputy Boyd Barrett said that the experience of the St Helen’s Court tenants pointed to the “urgent need for the government to close loop-holes in legislation that can be exploited by unscrupulous vulture landlords” and to “strengthen tenant’s rights to security of tenure.”

“The experience of the St Helen’s Court residents shows the utterly unscrupulous and predatory character of some of these vulture landlord’s.

“This property which was originally sold by NAMA has been passed from one vulture property speculator to another – all of whom have attempted the mass eviction of the tenants.

“It is obvious the landlords have no interest at all in providing secure tenancies but simply see the property as a speculative asset whose value they can increase if they are able to evict all the current tenants.

“Although, we have worked successfully so far with the tenants to resist these eviction attempts, it is clear that they are trying to bully, intimidate and wear down the tenants. This has already led to some tenants simply leaving because of the stress and uncertainty. If the number of tenants drops below ten, it is very possible the landlords will use another loop-hole in the legislation to make another attempt at mass eviction.

“We have warned the government repeatedly over the last number of years that these loop-holes exist and that they must be closed down and the government must legislate to give tenants real rights and security of tenure.

“Is it any wonder we have a dire housing and homelessness crisis when the government fails to give real rights to tenants in the private rented sector and continue to allow this kind of predatory, greed driven behaviour by vulture landlords?”