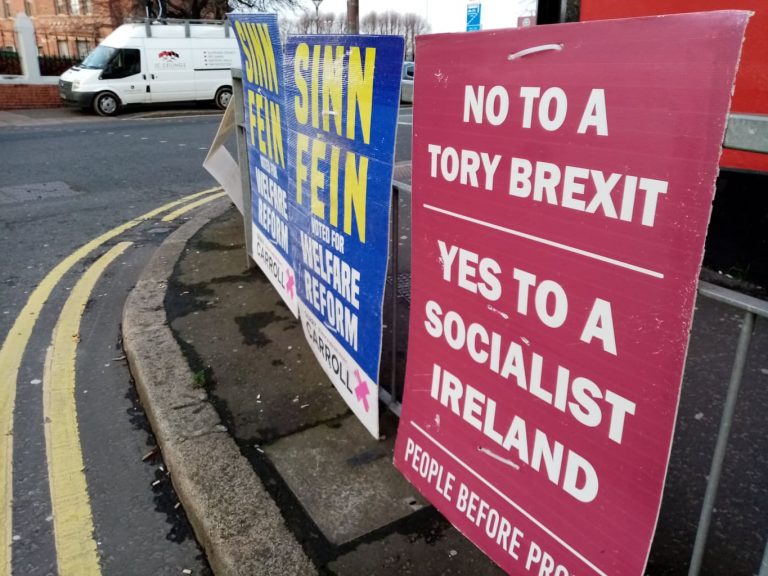 While the focus of the mainstream media is on the sectarian headcounts for the Northern election, an important contest is taking place in West Belfast. Unlike other constituencies where the main lines are supposed to be between nationalists and unionists, there is a fight between Sinn Féin and their left challengers from People Before Profit.

And the Sinn Féin leadership are taking it seriously – very seriously.

In the last week of the general election campaign they have ordered their branches to erect posters that proclaim ‘People Before Profit – Still Support Brexit’. Hundreds of these have appeared across the constituency. The name Sinn Féin does not appear anywhere on the posters. They are meant to give an impression that they originate from People Before Profit.

Why is the best funded party on this island stooping to such a low level?

They are worried – because the challenge to them does not come from conservative forces but from the genuine left.

Sinn Féin have no posters attacking either the SDLP or Aontú or even the Tories or DUP. Aontú, for example, emerged as a split from their ranks, taking an anti-abortion stance. But despite a history of ferocious opposition to splits, Sinn Féin does not say a word about them.

The reality is Sinn Féin have sold out their working class base.

West Belfast has a high level of welfare recipients. Many suffer ill-health, trauma and from the effects of long-term unemployment. Despite this, Sinn Féin and the DUP agreed to allow decisions on welfare to pass over to the Tories in Westminster, knowing that these would launch attacks. People are now suffering the full brunt of the so called ‘welfare reform’. Many will be driven well below the poverty line.

Sinn Féin agreed to this change in return for the Stormont assembly getting the power to vary tax rates on big business. Or to put it more simply, to cut the tax rate on profits to just 12.5% – the same level as in the South.

People Before Profit have been relentless in attacking this deep betrayal of working class people. Hence the anonymous posters.

Health workers are also taking strike action to demand pay parity. They want the same rates of pay as other workers throughout Britain. Yet neither Northern Sinn Féin Leader, Michelle O’Neill, or the DUP’s Jim Wells, did anything to remove this pay disparity for workers when they were Health Ministers.

All of this shows why there is growing opposition to Sinn Féin’s domination of West Belfast.  Hence the underhanded tactics about Brexit.

For the record: People Before Profit is totally opposed to a Tory Brexit. We have repeatedly attacked Johnson’s project of a ‘no deal’ Brexit which would harden partition. We support the right of people to a border poll and advocate for a new socialist Ireland as the most viable solution to Brexit. We say all this, while attacking the way the EU forced the people of Ireland to pay €64 billion to bail out bankers. We are an EU critical party that opposes how privatisation and austerity are embedded in EU Treaties.

Sinn Féin know all this because they have heard it from our representatives repeatedly.

But they think they can scare people away from the genuine left by dirty tricks. It won’t work.