Save Our Seafront Petition To Dún Laoghaire Rathdown Cc 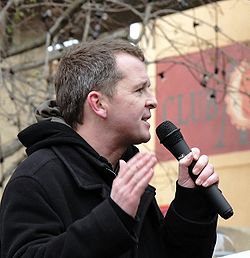 In a statement today, Richard Boyd Barrett TD, chair of Save Our Seafront announced that he will be delivering a petition with nearly 2000 signatures to the Council this afternoon calling on the Chief Executive to ensure that a swimming pool is included in this phase of the redevelopment of the historic Baths site in Dún Laoghaire.

The Baths were shut down in the 1990’s and have been lying abandoned ever since.  In the mid 2000s the council planned to sell the site to a developer to build a ten-storey private apartment block. This plan was met with outrage by the residents of the greater Dún Laoghaire area, Save Our Seafront was founded by Richard Boyd Barrett and thousands marched and signed petitions until the plan was abandoned.

The battle continued over the next few years until a commitment to developing the area as a public amenity was finally agreed.  The plan was to be in 2 phases with a swimming pool to be brought in in Phase 2.

Finally, last year, the work on Phase 1 started.  The endless delays caused a huge increase in the cost of the project.  In November of last year the contractors working on the site caused a leak of plastic shards into the sea.  This disaster further held up the project and now it looks like it will not be finished until July 2020, even though it was due to be completed this month.

After a briefing for councillors, attended by Save Our Seafront’s Cllr Melisa Halpin, last November where it was reported that a pool could be included in this phase of the project,

Save Our Seafront hosted a well attended public meeting earlier this year where there was overwhelming support for this.

Since that briefing, the council seem to be pulling back on this commitment and, once again want to long finger the project.

Save Our Seafront have now gathered nearly 2000 signatures on a petition calling for the pool to be included now.  Cllr Melisa Halpin will be tabling a motion at tonight’s meeting of the Dún Laoghaire Area Committee to this effect.

Richard Boyd Barrett TD said:  “The new development at the baths site should include a swimming pool.  This is what thousands of people marched for over 10 years ago and, it is what many people expect from the current works.

“The need for a seawater swimming pool is even more obvious than it was when we first started campaigning.  Seawater swimming has become increasingly popular over the last few years with many people swimming all year round.  A safe seawater pool would extend this popularity and allow people who find the open sea a little intimidating to be part of this swimming community.

“It would be absolutely ludicrous to complete this phase of the project, open the area up to the public and then close it down again to put a pool.  We need our pool now.”

“It would be disgraceful if the council allowed the current contractors, who have already caused the plastic shard disaster which has led to a delay of another 8 months, to finish up this contract without putting in the much needed and wanted pool.”