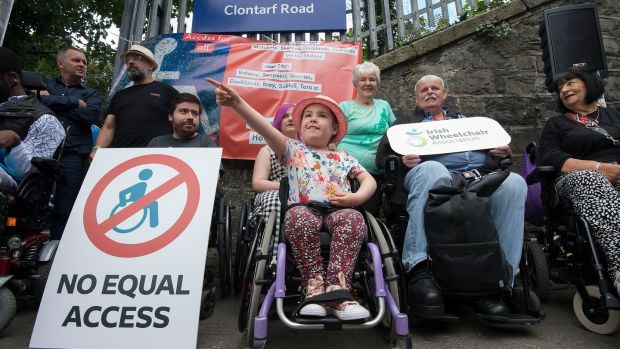 A protest was held on Friday July 26th at Clontarf Dart station highlighting the issue of lifts being continually out of service on the Dart line denying equality of access to people living with a disability and people with mobility difficulties.

Clontarf Dart Station lifts are regularly out of order, so too are those at Shankhill, Dunboyne, Bayside, Sandycove, Seapoint, Blackrock, Connolly and Tara St.

Bernard Mulvany, People Before Profit rep for Clontarf, whose daughter is a wheelchair user and who helped to organise the event said: “The group is calling for Dart station lifts to be working so that people living with a disability have access like everyone else. If this means that there needs to be extra staff at the Dart stations to protect the lifts from being vandalised, then that’s what needs to be done.

“Open and free access to public transport should be a core part of the government’s commitment to tackle climate change.”

Speaking at the demonstration, People Before Profit TD Richard Boyd Barrett whose constituency of Dún Laoghaire includes a number of stations with lift issues said:

“Equality of access on public transport for all the people in our community must become a redline issue. For too long now people living with a disability, people with mobility issues and the elderly have been forced to deal with a cumbersome and unequal situation on our public transport routes.

“Very many stations in my area of Dún Laoghaire, but also all along the Dart line, have experienced major issues with the lifts. In many cases, the lifts are not operational for long periods of time.

“This situation is totally unacceptable and must be addressed by the government in the upcoming budget.

“Proper funding and investment into our Dart stations must be allocated so that we can provide adequate staffing levels in every station, fully functional lifts as a minimum and drastic improvements to access points.

“Disgracefully we have seen staffing levels reduced and in some cases, staff removed entirely despite protests from the local community.”