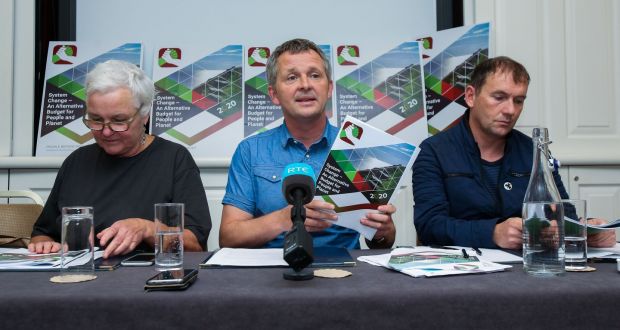 People Before Profit to insert amendments to put private health and industrial capacity under public control and to establish an emergency rent, mortgage and utility bill amnesty.

People Before Profit indicated that they support the main provisions of the bill but are proposing a number of amendments to extend entitlement to the €305 illness benefit payment; to take private health and other industrial capacity needed to tackle the crisis, into public control for the duration of the crisis.

Gerry Carroll, People Before Profit MLA for West Belfast, also made an “urgent appeal” to Leo Varadkar “to put maximum pressure on the northern political authorities to immediately adopt a consistent all-Ireland approach to tackle the public health emergency.”

Richard Boyd Barrett said: “We fully support the public health measures taken to date and support the overall thrust of the legislation to provide income support for those affected by the Covid-19 crisis and to give all necessary powers to public health authorities to protect public health and to prevent disease transmission.

Any extension of the emergency powers established under the bill should be subject to a vote of the Oireachtas, currently the bill only requires that it be laid before the Dáil. The government and the Ceann Comhairle should ensure that all amendments tabled to the legislation should be voted on and not prevented from being taken because of the time guillotine at tomorrow’s Dáil session.”

“We believe, the section of the bill giving power to the health authorities to take necessary actions to respond to the emergency should also, include putting all private health care capacity, relevant industrial capacity and suitable buildings under public control and direction, particularly capacity to deliver beds, produce ventilators or respiratory equipment, testing capacity, sanitisers, PPE and buildings that could be used for necessary isolation under public control. This is particularly important because we have enormous industrial capacity across the country to produce items like ventilators, in Medtronics in Galway, and lab testing equipment, in Randox,Co Antrim, but it is not at all clear that all that capacity is being put at the disposal of the public health authorities.”

Brid Smith said: “We believe all financial pressures on those whose incomes are disrupted, in terms of rent, mortgage payments or utility bills should be removed by establishing an amnesty for all those payments for the duration of the crisis.”

Gino Kenny added: “We believe there should be just one tier of income support of €305 per week for all who have to stay at home or lose their job.

Everyone who is staying at home either because of illness, medical direction or because they or their employer cease work to comply with public health advice are losing income because they are acting to prevent disease transmission therefore, they should all receive the €305 payment.