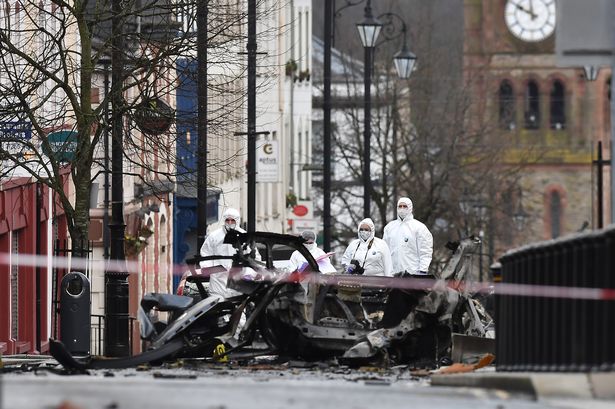 The reckless car bomb on Bishop Street and subsequent hijackings across the city have been widely condemned by the people of Derry. We are with the overwhelming majority of people who say they have no desire to go back to the dark days of violence. We call on those who organised these attacks to desist immediately and reflect upon the response to their actions.
These actions will not assist in ending partition or in ensuring there will be no hard border. They will do nothing to challenge the hardship inflicted on communities by welfare reform and the perpetuation of deprivation here. It’s always been the case that such actions do not empower working class communities to organise for fundamental social change.
The security state and the PSNI immediately seized the opportunity to legitimise, reinforce and step-up their justification for political repression and harassment. The notion political policing in the form of house raids, stop-and-search, internment and violations of civil liberties can ever be part of a solution should be opposed. The last thing we need now is for working class communities to be paralysed by fear and pushed into the hands of a political establishment intent on maintaining an unjust status quo.
This weekend we march to mark the 46th Anniversary of Bloody Sunday. The political establishment and the military brass responsible for organising the murder of innocent people in Derry and in Ballymurphy have yet to be held to account. These massacres, the subsequent cover-ups and the denial of justice point to the root cause of the decades of death and destruction we have endured. General Michael Jackson along with his political and military cohorts belong in jail. The political establishment that celebrates and protects the likes of Jackson needs to be dismantled root and branch. Many can see through the hypocrisy of some of those who have been loudest in their condemnations over the last week.
We believe people power campaigns that empower communities are the most effective way to win justice for all those who have suffered at the hand’s of the state, to end political repression and to challenge the status quo based on continued deprivation and the denial of basic rights. We face political uncertainty and many challenges from vicious welfare reforms and privatisation of the NHS to the threat of a hard border and the attempt by the far-right to establish the politics of hate North and South. We call on those who wish to see a more just and equal society to step-up their efforts in the coming months to build movements and struggles inspiring confidence and hope in the goal of fundamental social change.
Join People Before Profit