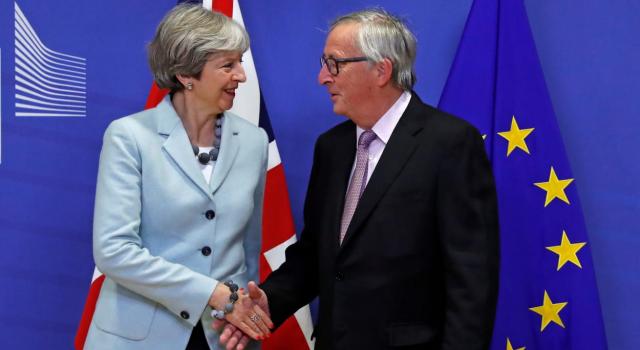 People Before Profit are ready to oppose a hard border, or any other retrograde measure which is threatened to be imposed on people here.

We utterly condemn the DUP for its nefarious role in the current situation. Foster and co are willing to impose a hard border on Ireland in a vain effort to strengthen partition. In the long run, however, their destructive agenda will have the opposite effect. Brexit is causing the British state to weaken. People Before Profit support the right of people to vote on partition, and will advocate a new Ireland that everyone can have a stake in.

People Before Profit welcomes the intense crisis in the Tory party, caused by Brexit. It is an opportunity for progressives in Britain and Ireland to finally rid ourselves of this rotten government. The Tory/DUP coalition must be brought down. They have no mandate for the agenda they are pursuing. And we do not accept their right to dictate the terms of Brexit, especially in the North where people voted differently than England and Wales. For that reason, we continue to support the right of people in the North to vote on the terms of a Brexit deal and to veto the imposition of terms which are unsuitable for the region.

Leo Varadkar’s government has proven utterly toothless in the Brexit arena. Their main strategy of the Southern government has been to rely on the EU to protect its interests. But while it may appear to seek to pressurize Britain at the moment, this could change if they think that big money and its corporations will benefit.

If a deal is agreed between London and the EU that includes measures like a hard border, the Irish government must veto it. Should a ‘no-deal Brexit’ occur, then Varadkar should clearly state that his government will not implement any measures that would lead to hard border. Indeed, there cannot be a hard border unless the Irish government implements one. The Irish Dail should support every move remove border posts on the Northern side of the border and it should refuse to erect such posts on its own side. Varadkar must make clear whether his priority interest is with the ordinary people in Ireland, or in doing the dirty work of the EU.

People Before Profit is deeply concerned, too, with recent activities by Sinn Féin. For decades the party was critical of the EU and consistently voted against further EU integration. Only in the last two years has it changed this position. Now it is falsely trying  to claim that those of us who oppose EU restrictions on public spending, for example, are in the same camp as the DUP and the Tories. Nothing could be further from the truth.

Sinn Féin recently spent thousands of pounds illegally erecting posters slandering the socialist politics of People Before Profit. Sinn Féin hope to slander People Before Profit, to weaken the most effective opposition to their left, as they express a willingness to join Fianna Fail in government in the South.

Even the dogs in the street know what is really at play here. While trying to attack PBP, they hope to distract from the fact that they gave Westminster the power to introduce welfare reform and Univesal Credit to the North—the very measures that are crippling working class communities like West and North Belfast.

Deal or no deal, People Before Profit will advocate mass civil disobedience against the imposition of a hard border in Ireland. Neither side in the Brexit debate has the interests of working class people at heart, and we refuse to be bullied into backing one or the other.

No one is in any doubt that Theresa May’s Tories would inflict pain on people here. But we do not forget that it was the EU who imposed billions of pounds of austerity on the Ireland during the recession. Like the great socialist James Connolly who served neither King nor Kaiser, we serve neither London nor Brussels.

People Before Profit will continue to fight for a socialist Ireland, where undemocratically mandated decisions aren’t imposed upon people through Brussels, London, or indeed the out of touch establishment parties of Ireland, but where ordinary people have control of their own futures.