People Before Profit will be fighting in four election constituencies elections, North and South of the border.

These elections provide a big opportunity to strike a blow against political establishments who preside over massive inequality on this island and look after their rich friends.

In the South, one in three of their TDS are landlords and this helps to explain why they have let the housing crisis get out of hand. Rents have reached crazy level and many young people will never own their own home. If we don’t bring change, they will be stuck in a high rent trap forever.  Thousands also languish on waiting list for years on end – because there are so few social houses.

The by elections give us an opportunity to strike back against this uncaring establishment.

The true colours of the FG-FF alliance were evident in the last budget. They used the excuse of Brexit and climate change to impose a carbon tax and refused to raise the minimum wage. But at the same time, they offered extra money to highly paid company executives. Under the Special Assignee Relief Programme, those who earn over €75,000 a year can see their taxes cut by 30%. These can even claim tax relief for sending their children to private schools.

In the North, the main parties all agreed to allow the Tories to attack on welfare recipients. They even agreed to cut the corporation tax on big business.

People Before Profit will be offering a radical alternative to build a socialist Ireland.

We want to make Apple pay us the €14 billion we are owed. Our aim is to fund proper public services to allow people escape from rip-off Ireland where we are fleeced for creche fees, car insurance, bus fares, hospital charges etc,etc

Elections provide a brilliant opportunity to present alternative policies that can guarantee housing and a  decent standard of living for all.

Ireland is undergoing a massive transformation. Across the 32 counties, People Before Profit are advocating socialist policies that strengthen working class people, cut across any attempt to divide us, and that will shape this transformation for the many and not the few.

We are opposed to a hard border, and a Tory Brexit that will lead to a race to the bottom. In the event of Brexit, no Irish government should follow any EU order to erect border posts. Instead Dáil Éireann should support a campaign of civil disobedience to have them removed.
The clash between the EU and Britain is helping to re-open the question of the border and partition. People Before Profit want a 32 county socialist Ireland. For us, that does not mean simply attaching the North to the current 26 corrupt county state. A new socialist Ireland requires a social upheaval to bring about a country where working people are guaranteed a better life. We want an Ireland that everyone— Protestant, Catholic, Migrant or other—can have a stake in.

The first signs of this 32 county movement are starting to emerge.

We salute the activists from the Repeal movement who immediately after their own victory moved rapidly to campaign in the six counties for free, safe, legal and local access to abortion.

We point to the unity within the anti-fracking movement who have campaigned across the Sligo-Leitrim and Fermanagh borders for a ban on this destructive form of energy production.

We praise the solidarity displayed by the UNITE trade union in Waterford who rapidly responded to the occupation of workers by in East Belfast by taking up a large solidarity collection to support their fight to retain jobs.

These small glimmers of 32 county solidarity point to how we can, together, build a better country. We will not win a united Ireland by telling workers that they need to accept more austerity to create a 32 county capitalist tax haven. Nor will we win it by appeals to flags, identity or narrow nationalism.

Rather, we can recreate this island through the emergence of struggles from below; wherein we fight for a vision of an Ireland that guarantees free health care for all, that shares the wealth, that stops all forms of discrimination and removes church control of schools and hospitals.

In these elections, People Before Profit is the one party that is standing as genuine socialists who give one guarantee: our votes will never be used to prop up any right-wing parties.

In this we differ fundamentally from parties like Sinn Féin. They have already told us that they are willing to join a coalition in the South as minority players to Fianna Fáil or Fine Gael. In the North, they have been in government with the DUP and helped to hand over power to the Tories in Westminster to allow them to attack those on welfare. And all of this for a dirty trade off that allowed the combined forces of DUP and Sinn Féin to cut the taxes on big business to a level that equalled the South.

Against this type of alliance with the Right, People Before Profit advocates a pro-worker, pro-environment, pro equality agenda. 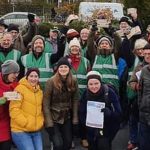 • An automatic right to collective bargaining: Workers have a right to
join a union of their choice and decide who will represent them in negotiations with their boss.
• A repeal of all anti-union laws: North and South workers are legally hampered in their ability to take industrial action. Political strikes are banned and boycotts of strike bound goods and services are illegal.
• Ban zero-hour contracts: Employers are using fear and insecurity to push young workers into precarious work, sometimes without even clear hours of work. All workers must be given proper contracts.
• Turning the minimum wage into a living wage: Employers must be
forced to pay a wage that covers the real cost of living.
• Cutting the working week and creating jobs: Automation and climate
change are good reasons why we need to move to a four-day week.
• Preserving jobs by taking companies who declare large scale redundancies into public ownership: Reckless employers should not be allowed to destroy the livelihoods of workers. Where possible, their enterprises should be taken over to maintain jobs.
• Reversing the retirement wage: Throughout Europe, workers must now work until they are 68. We would bring back retirement at 65 on proper pensions, by ensuring employers make a mandatory pension contributions for workers.

• Free public transport: Ireland has become a car dependent society because public transport is too expensive, unreliable, and sometimes not available. We need a massive extension of the bus fleet, a re-building of the rail infrastructure and a move to free public transport.
• Keeping fossil fuels in the ground: There should be a ban on any further fossil fuel exploration or extraction in Ireland.
• An all-Ireland public energy company: Energy in Ireland is too dependent on fossil fuel. We cannot wait for private companies that are subsidised from the public purse to make the transition to renewables. We need massive public investment.
• Creating greener jobs through retrofitting: Ireland’s housing stock loses
too much energy and is expensive to heat. We need an all-Ireland public company to retrofit houses.
• Expanding forestry: Ireland has one of the lowest coverage of trees in Europe.
Let’s integrate the National Trust and Coillte and invest in a public company to expand our coverage, North and South.
• Re-orientating Irish agriculture away from a reliance on cattle: Beef processors have huge control over Irish agriculture. They need to be nationalised so that we can start the transition away from cattle to vegetables, hemp, trees. All CAP payments and other subsidies to go to small farmers who make the transition.
• No Carbon taxes – a Just transition for workers: The political
establishment blame working people for carbon emissions. We say hit the corporations and ensure there are green jobs for workers. 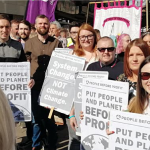 • An end to attacks on welfare: Welfare reform must be abolished, as well as the punitive caps on welfare spending in the South.
• Urgent action on special needs: Guarantee early assessment and intervention for children with special needs.
• Urgent action to cap childcare costs: We need a National Childcare Agency that will be free at the point of use.
• Free, safe, legal and local access to reproductive healthcare: A woman’s right to choose should be respected.
• Taxing the rich to redistribute wealth: The tax haven economic model must be ended, and plans to reduce corporation tax in the North scrapped.
• Full public support to enable all to live independently where they can: Full support for carers and an expansion of public facilities for those in need.
• Housing as a right, not a privilege: We need an end to the erosion of social housing, and a massive programme of new homes to end the housing crisis North and South.
• Opposing homophobia and transphobia: People should be free to live safely, regardless of their sexual and gender preferences.
• An end to sectarianism and bigotry: We need to move away from the inbuilt sectarianism of the Northern state. An Irish Language Act should be implemented immediately.
• A National Health Service: We need an all-Ireland national health service that is free at the point of use, and a complete end to privatisation and wasteful PFI schemes.
• A welcome for refugees: Stop the racists – migration has enriched Irish society.
• An end to church control of schools and hospitals: Objective education on sex and consent free from religious indoctrination. 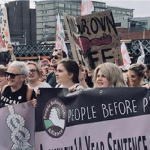