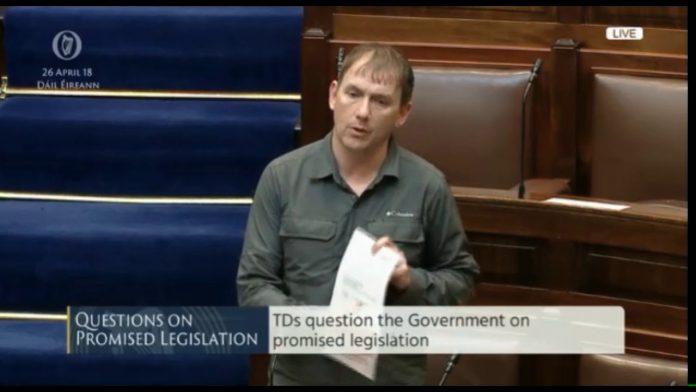 Speaking in the Dáil today on Statement on Youth Homelessness and in reaction to the Ombudsman for Children’s report ‘No Place Like Home’, People Before Profit TD Gino Kenny said that the homeless crisis and the impact it is having on children experiencing homelessness is a “shameful stain on Irish society”.

The TD for Dublin Mid-West also called for people to come out on the streets for the Raise the Roof rally on May the 18th which will demand and end to the housing and homeless crisis.

He said: “Behind the stats, there are families and children living in extremely traumatic conditions. Hubs, B&B’s, hotels – emergency accommodation, they are unnatural environments for children. This ongoing, appalling situation is the bitter fruit of a failed government policy which is effectively leading to the institutionalisation of children and young people and all that entails.

“We must not forget children and young people living in Direct Provision – also a completely unnatural and unhealthy environment in which children fail to thrive.

“This crisis represents a shameful stain on Irish society.

“Young people coming out of care are often extremely vulnerable. There is a dearth of accommodation for them and many can fall into homelessness as a result.

“The crux of the matter is that we have over 10,000 people in emergency accommodation and public housing has become a dirty phrase, aided and abetted by the policies of this and successive  governments including Fianna Fail and the Labour Party.

“Government policy of selling public land to private developers has to end immediately and we need a massive provision of directly built public and affordable housing on public land. NAMA should be used for a social good by taking the lead on public housing provision. Rebuilding Ireland has categorically failed and we need a radical change of direction in our housing policy.”