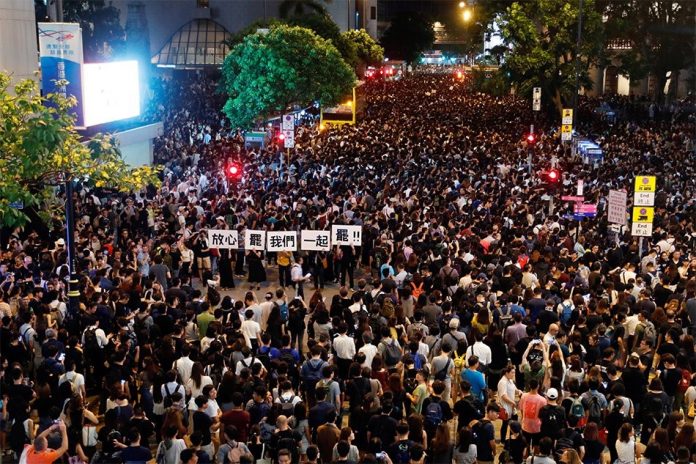 The mass protests which been rocking Hong Kong for eight weeks reached a new level this Monday.

There were mass strikes, as part of an attempted political general strike, which were supported by 96 trade unions from the Hong Kong Confederation of Trade Unions. They involved airline pilots and workers, social workers, university teachers, and Hong Kong Radio employees.

This followed a dramatic strike by 40,000 civil servants on Friday which was in defiance of a government imposed ban. While the strike was clearly not total it marked a serious escltion of the struggle and may prepare the ground for a bigger general strike soon.

There have also been intensifying clashes between demonstrators and police on the streets. Rising levels of police brutality and attacks on protestors by white T- shirted gangster mercenaries have not broken or deterred the movement. On the contrary public support has stayed strong and resistance on the streets has risen.

On Monday protestors laid siege to six police stations and attempted to set fire to one of them.

The immediate cause of the revolt was the attempt by Hong Kong Governor, Carrie Lam, to introduce a draconian Extradition Law that would have allowed political activists and refugees (especially from the post-Tianenmen Square crackdown) to be deported to the hands of the extremely repressive Chinese state.

But although the Governor says the Law has been suspended the movement has continued and deepened its demands.

The demonstrators have put forward four immediate demands: 1) for the government to completely withdraw the extradition bill; 2) for the police to stop saying the June 12 protests were “riots” 3) the unconditional release of all arrested protesters; 4)an independent inquiry into the cops’ behaviour.

Protesters are also pushing for greater democratic rights, with a demand for universal suffrage and the democratic election of the territory’s leaders.

As in any spontaneous mass movement there are different elements involved, some more to the right, others more to the left. Some on the right of the movement are pro-Western and wave Union Jacks, looking back to the days of British colonialism.

The left, which is not aligned with the Chinese Communist Party supports the strikes and calls for the inclusion of social and economic demands. Some on the left see the possibility of linking to working class struggle on the mainland and urge that protesters, trade unions, student unions and social movements should  combine into a joint action committees to lead the struggle forward.

But regardless of these debates it is incumbent on socialists internationally to stress two basic points. First the democratic demands of the protestors are entirely justified and deserve our support. Second the Chinese state is not in any way progressive or socialist. It is a thoroughly capitalist regime (based on both state and private capital) with massive exploitation of its working class, severe repression of its ethnic minorities and a tyrannical authoritarian police state apparatus. We stand in solidarity with those who resist its rule both in Hong Kong and on the mainland.

Online Public Meeting On The Crisis In The Farming Community

Government Must Do More To Protect Vulnerable Workers

Tension In Greens -Just Stay Out Of Coalition With FF And...