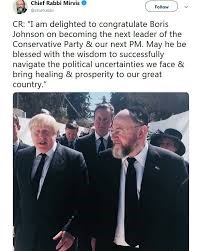 The long running ‘anti-semitism’ smear campaign against Jeremy Corbyn and the British Labour Party has intensified.  On Tuesday (26.11.19) UK Chief Rabbi, Ephraim Mirvis, claimed in The Times that British Jews are ‘gripped by anxiety’ at the prospect of a Corbyn-led government and accused Corbyn of being ‘complicit in prejudice’ and ‘unfit for office’.

Like so many of the previous accusations levelled at Corbyn this latest smear was based solely on assertion, unsubstantiated by any evidence. Yet it was massively and uncritically amplified by the media.

No one in Ireland should be in any confusion about what is happening here. This is a massive and entirely manufactured witch hunt designed to damage the Labour Party and its left wing leader. There is no reason whatsoever to believe that the Labour Party has any particular problem with anti-semitism; on the contrary it is the least anti-semitic, most anti-racist major political party in Britain and Corbyn has been a lifelong anti-racist campaigner.

Four forces are collaborating in this smear campaign: the Israeli State and its Zionist supporters in Britain, foremost of whom is the Chief Rabbi; the British establishment; the Blairite wing of the Labour Party and most of the British media.

The main aim of the Zionists is to suppress criticism of Israel by equating all support for Palestine with anti-semitism. They have always done this but at present, faced with the growth of the BDS campaign internationally, they have raised this slander to a new level. The aim of the British establishment is to block, by any means necessary, the formation of a Corbyn-led Labour Government for obvious reasons of class self-interest. The Blairite fifth column in Labour’s ranks would actually prefer a Tory government to a Corbyn one and see this as a chance to achieve what they spectacularly failed to do in successive Labour leadership elections – namely to oust Corbyn. The media, which is overwhelmingly under right wing control and has always hated Corbyn. Simply goes along with uncritical reporting of these phoney allegations and gives them maximum publicity.

For example right wing former Murdoch editor, Andrew Neil, interviewed Corbyn and repeatedly demanded the he apologise to the Jewish people: an obvious trap since an apology would admit guilt. Then, when Corbyn reasserted his opposition to anti-semitism and all racism, this was reported as ‘Corbyn refuses to apologise to the Jewish people’.  Meanwhile the media, while relentlessly pursuing Corbyn, failed to mention that the Chief Rabbi is a close associate of Benjamin Netanyahu and a Tory who warmly congratulated the overtly racist Boris Johnson on becoming Prime Minister. Similarly, they gave very little coverage to the Muslim Association of Britain’s very well founded charges of Islamophobia in the Tory Party and saying next to nothing about the impending visit to Britain of world’s No.1 racist, Donald Trump.

Of course, with the exception of when Labour was led by Tony Blair, the vast bulk of the British mainstream media, has always been pro-Tory and hostile to Labour but with the advent of Corbyn this has reached new proportions of vitriol. In this context those of us in Ireland, North and South, who ardently want to see a Labour victory in the coming general election, will hope that Corbyn will wage a more vigorous campaign with mass rallies and demonstrations and that he himself hits back by calling-out the witch hunt for what it really is. Seizing the initiative in that way will give him the best chance in what is a very tough struggle against the combined forces of the British establishment.