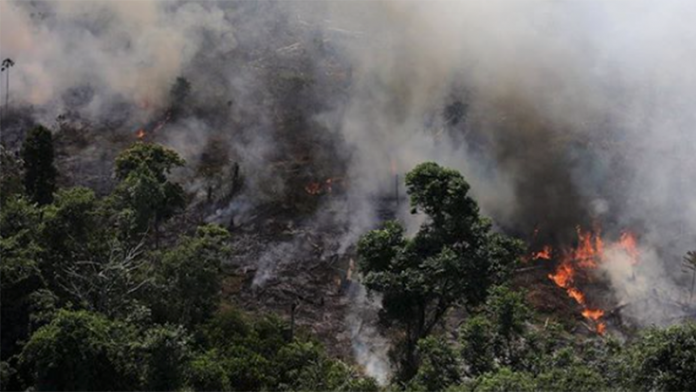 The world is reeling today at the sight of the fires blazing through the Amazon rain forest, sending plumes of smoke into the sky that cover an area the size of the EU. Unlike the wildfires seen in the last few weeks in Siberia, however, the fires in the Amazon were started by cattle ranchers and loggers who want to clear the land. They are supported by the far right President of Brazil Jair Bolsonaro, who has claimed without any evidence that the fires were started by NGOs. Bolsonaro has consistently backed loggers and agri-business and has repeatedly called for the indigenous peoples of the Amazon to be cleared off the land.

Bolsonaro’s treatment of indigenous people in Brazil is heinous, but it is not just these people who will be affected by the destruction of the Amazon. The rain forest is one of the largest carbon sinks in the world and provides approximately 20% of the world’s oxygen. The fires are releasing huge amounts of carbon dioxide into the atmosphere and will bring us ever closer to a tipping point that could set off runaway, irreversible climate change.

Yet while the Amazon burns, the EU with the support of the Irish government are continuing to ram through the Mercosur deal which will see huge amounts of Brazilian beef being imported into Europe in return for pharmaceuticals and German cars going the other way. This deal actively encourages Bolsonaro to continue his destructive policies, as the trees cleared will make way for grazing cattle and increase global greenhouse gas emissions even further. Mercosur is therefore nothing more than a straight path to ecocide.

People Before Profit are calling for the Mercosur deal to be rescinded immediately. Bríd Smith TD has also called for an urgent meeting of the Climate Committee and has called for the Brazilian Ambassador to appear before it.

A protest in solidarity with the indigenous people of Brazil has been called by Extinction Rebellion at the Brazilian Embassy tomorrow at 11am. People Before Profit are in full support and urge people to attend in solidarity.